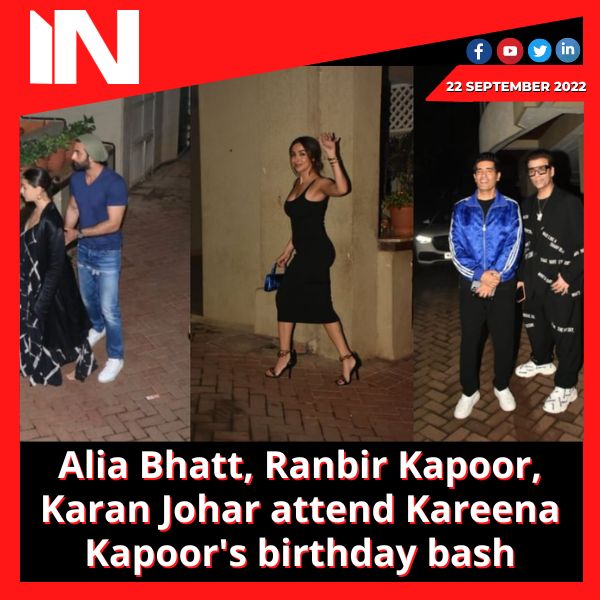 The couple who are expecting their first child, Alia Bhatt and Ranbir Kapoor, attended the festivities jointly. Ranbir Kapoor chose a blue T-shirt, denims, and white sneakers in contrast to Alia’s all-black and all-white ensemble. When the photographers positioned outside Kareena’s home requested them to take a photo together, Alia also grinned.
Malaika Arora dressed for the event in a black bodycon dress and matching heels. She was also toting a tiny blue bag. Outside Kareena’s house, Malaika also grinned, posed, and waved to the photographers.

Along with engaging with the photographers, Karan Johar also posed for them. A person said “good morning” and remarked that it will be morning when he left as he bid the paparazzi “good night.” He queried, “So it will be fine morning when I depart? Okay.” Near Kareena’s house, he further posed with Manish Malhotra.

Manish wore a black T-shirt, matching slacks, a blue jacket, and white sneakers whereas Karan sported all-black attire. Karan posted a selfie with Kareena on his Instagram Stories. In Kareena’s party, they both posed and grinned for the camera. Alongside the image, he added the emoji “Bebo (red heart)”. Bebo is Kareena’s pet name.

Manish also posted a number of photos from the celebrations on Instagram. He and Kareena were seen taking a selfie in the first picture. The birthday girl was dressed in all black. Maheep Kapoor, Manish, Karan, and Kareena were all in the second selfie. As Manish grinned and took another photo, Karan, Karisma, and Kareena clasped hands. Karisma chose to dress in red.

Another picture shows Manish posing with Kareena and Amrita Arora. The final slide showed Manish and Malaika taking a picture while smiling and posing. With the OGs, Manish wrote, “#og.” Malaika and Amrita responded to the images by using red heart emoticons.

Earlier, Karisma shared images from her sister’s birthday celebration at their father Randhir Kapoor’s home on Instagram. Kareena was shown with her younger son Jehangir Ali Khan, who extinguished the cake’s candles. The message said, “Happy birthday.” Kareena and Karisma were seen shooting a picture together in another image. During the event, they posed for pictures while wearing white clothing. Karisma tweeted a picture and added the caption, “And the twinning continues.” The daughters of seasoned actors Babita and Randhir Kapoor are Karisma and Kareena.

Kareena last appeared in Laal Singh Chadha with Aamir Khan. She also just finished filming her OTT debut project under Sujoy Ghosh’s direction. The Devotion of Suspect X, a Japanese novel, served as the basis for the movie. Jaideep Ahlawat and Vijay Varma play the key parts in the movie as well. She has also started getting ready for Hansal Mehta’s movie.