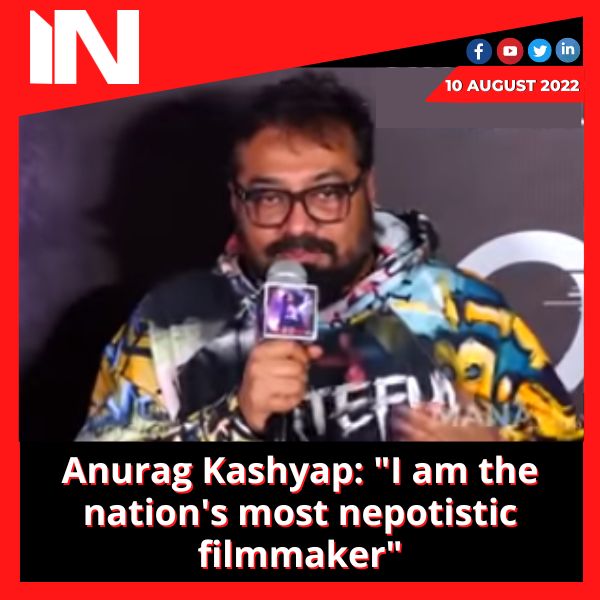 Anurag Kashyap claims to be the most nepotistic Indian director and claims that in order to collaborate on a project, he must know the right people. The actor Taapsee Pannu attended the interview where Anurag discussed nepotism.

Anurag is eagerly anticipating the debut of his upcoming film, Dobaaraa. The movie is an authorised Hindi translation of the 2018 Spanish film Mirage. The movie, which also features Pavail Gulati, Rahul Bhat, and Saswata Chatterjee, was written by Nihit Bhave.

In an interview with News 18, Anurag claimed, “I am the most nepotistic filmmaker in the nation. Nepotism: what is it? Okay, fine, my daughter isn’t in the movies, but I still won’t employ a stranger.

It’s not even favouritism; it’s not even a camp. I must get to know my clan because I believe in them. I have to be completely confident in the people I hire because I place a lot of trust in them.

Who do you most trust during (troubled) times, he continued? Actually, anyone will trust their family, so to me, my set resembles their family. Nepotism does exist, as evidenced by the fact that I hire people through my connections (ek ke through hi dusra aata hai). Nepotism in that case. If my first assistant director (AD) were to depart, I wouldn’t be aware of any suitable replacements in the market.

I’ll get another good AD from my AD. He will provide me with a replacement if my production designer leaves.

Taapsee is “super nepotistic,” Anurag added in jest, and she has been attempting to launch her sister Shagun Pannu with KRK (actor Kamaal Rashid Khan). Adding that Shagun has stopped visiting Dubai since hearing the news because she is afraid, Taapsee burst out laughing.

Dobaaraa brings Taapsee and Anurag together once more. On the romantic drama Manmarziyaan, which also starred Vicky Kaushal and Abhishek Bachchan, they first collaborated four years ago. Anurag’s debut sci-fi movie and first remake are both titled Dobaara.