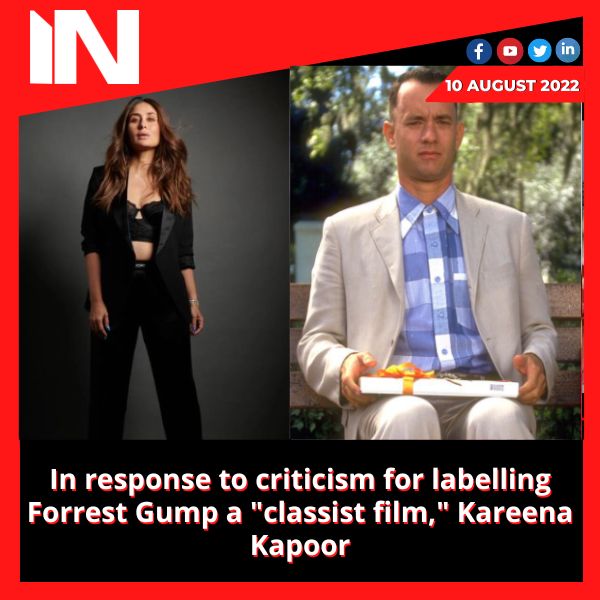 After calling the Academy Award-winning movie Forrest Gump “an elitist kind of classist film,” actor Kareena Kapoor received criticism from some users on social media. Kareena claimed in a recent interview that she avoids Twitter because of the “one reason or another” why people troll actors. Kareena also explained her reasoning for mentioning Forrest Gump.

In an interview with News18, Kareena said, “Every day, we get trolled for one reason or another. Because of this, I don’t use Twitter. It seems to be intended for those who want to keep venting, and I don’t have time for that. With my kids, family, and job, I’m very busy. I can’t fit everything else in.

She also discussed her statement regarding Forrest Gump: “Somebody who probably doesn’t speak English will watch the film for their love of the story that they’ve come to know from the trailer and not because it’s a remake of a Hollywood film.” To allow viewers to watch and enjoy it in their own language, it is also being dubbed in Tamil and Telugu.

Kareena recently stated, “There are still a lot of people who still haven’t seen Forrest Gump,” in an interview with News18. Forrest Gump would not have been seen by the general public. It is a film that is classist in an elitist way. Since the majority of people haven’t seen it, they will watch it for the story. They won’t watch it because it is a Forrest Gump remake. Of course, Aamir (Khan) made it for that, but people would also like to see this story.

People on social media platforms expressed shock following her remark. “The reason I believe education is important,” someone tweeted. Another person added, “These individuals undercut the masses. We can now watch “elitist” movies at home thanks to OTT.

Any trash cannot compete with time and curiosity. I mean she says this for a mainstream movie, a Twitter user added.

On August 11, Laal Singh Chaddha is scheduled to arrive in theatres. The movie also stars Aamir Khan, Mona Singh, and Naga Chaitanya in addition to Kareena. Aamir Khan Productions, Kiran Rao, and Viacom18 Studios worked together to produce the movie. The Laal Singh Chaddha team just revealed that six months after its premiere, the movie will be accessible via OTT.