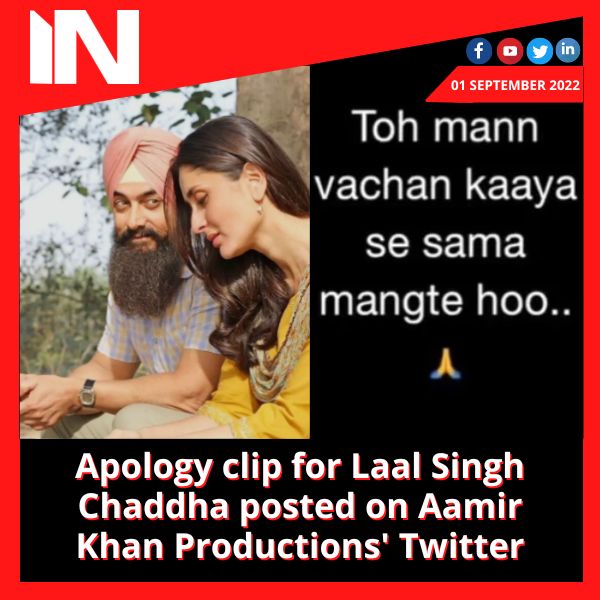 Days after a controversy over actor Aamir Khan’s movie Laal Singh Chaddha, an apology video was posted on the social media accounts of Aamir Khan Productions on Thursday night. “Michami Dukkadam,” which roughly translates to “may all my incorrect actions be inconsequential,” opened the clip. As text displayed on a black screen, a voice could be heard saying, “We are all fallible human beings who only make mistakes. Sometimes we do it unknowingly and other times when we are upset, sometimes with our words and other times by our deeds.”

It also noted, “We also cause harm to others through our jokes and occasionally through silence. I sincerely apologise if I have ever caused you any emotional distress and beg your pardon.” “Michami Dukkadam” marked the end of the video. The background music was the film Kal Ho Na No theme by actor Shah Rukh Khan.

In response to the video, someone wrote, “Hacked Definitely! This is unexpected coming from Aamir—the voice isn’t his.” Another fan said, “This account is definitely hijacked.” Another Twitter user questioned, “Hack ho gaya kya account (Has the account been hacked)?” “Aamir offers the Jain apology, Micchaami Dukkadam, as he does every year. Who voiced it this time, and how? “one additional supporter.

Laal Singh Chaddha received calls to be boycotted on social media prior to its publication. Aamir Khan responded to it by saying, as reported by news outlet ANI, “That Boycott Bollywood… Boycott Aamir Khan… Boycott Laal Singh Chaddha… I Feel Sad Also Because A Lot Of People Who Are Saying This In Their Hearts Believe I Am Someone Who Doesn’t Like India… In Their Hearts They Believe That… And That’s Quite Untrue. I Really Love The Country… That’s How I Am. It Is Rather Unfortunate If

“Our society is fairly tolerant, but there are some who sow ill-will,” Aamir stated in an interview in 2015. His wife Kiran Rao also made news when she revealed that she had thought about fleeing the nation for the sake of their child’s safety. Twitter users responded to the interview by posting tweets with hashtags like #BoycottLaalSinghChaddha and #BoycottAamirkhan.

The 1994 Hollywood blockbuster Forrest Gump has an official Hindi version in Laal Singh Chaddha, directed by Advait Chandan. Aamir’s first movie in four years is this one. Naga Chaitanya, Mona Singh, and Kareena Kapoor are also included. With 127 crore in revenue after 20 days of release, the movie tanked at the box office. A 180 crore reported budget was allocated to it.

At 17,000 feet, Milind Soman greets Ankita on her birthday and takes a photo with her