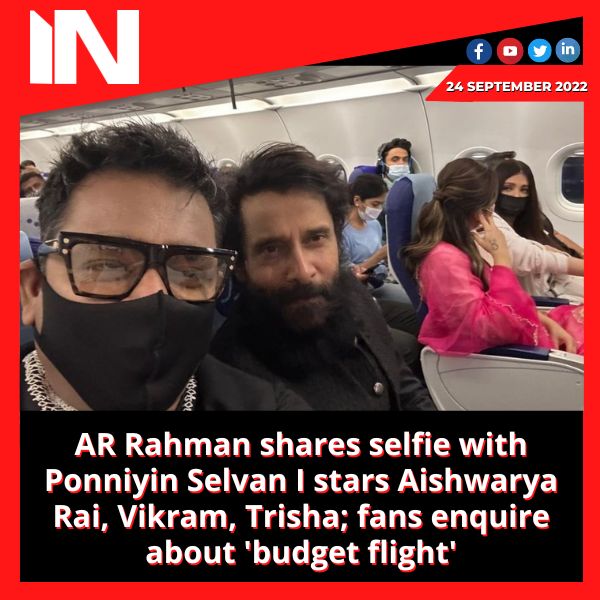 On Friday night, Ponniyin Selvan I actors Vikram, Aishwarya Rai, and Trisha posted an incredible flight selfie with music legend AR Rahman. After attending a promotional event, the musician was travelling to Mumbai from Hyderabad with the three of them.

AR Rahman commented on Instagram after posting the image, “Who do you think is travelling with me? On the road from Hyderabad to Mumbai… promotions for PS 1!” Vikram is seated next to the black-clad music composer, who is also wearing identical glasses and a mask as he takes the photo. Aishwarya Rai may be seen conversing with Trisha from a short distance away. Trisha is wearing a pink outfit, while Aishwarya is wearing a white outfit with a black mask.

As they were all aboard a flight, eager onlookers watched them all. The most crucial query is, “How come this isn’t business class or a private jet?” a fan questioned. We adore a budget (flight emoji),” another remarked. A fan commented, “Everyone from behind (laughing emoji)” after observing how individuals seated behind them tried to fit into the photo. “Aish and Trish are becoming close friends,” another fan added. Happy to see it.

In the movie Ponniyin Selvan I, Aishwarya and Trisha have competing characters. Trisha plays the Chola princess Kundavai in the movie, while Aishwarya portrays the villain Princess Nandini. In an interview with NDTV, Trisha had said of her friendship with Aishwarya off-screen, “The thing is, this was tough since we are not supposed to like each other too much in this film, but we got along rather wonderfully on set. Mani Sir would occasionally appear and remark, “Listen, you people are taking too much, stop talking, I can’t have this camaraderie for my scenario.”

The soundtrack for the Mani Ratnam movie, which hits theatres on September 30, was composed by AR Rahman. Along with its Telugu and Hindi translations, Ponge Nadhi and Kaveri Se Milne, he has also performed the Tamil song Ponni Nadhi.

Rahul Dev says he did Bigg Boss 10 as he had no work: ‘Itna kaam karne ke baad bhi…’