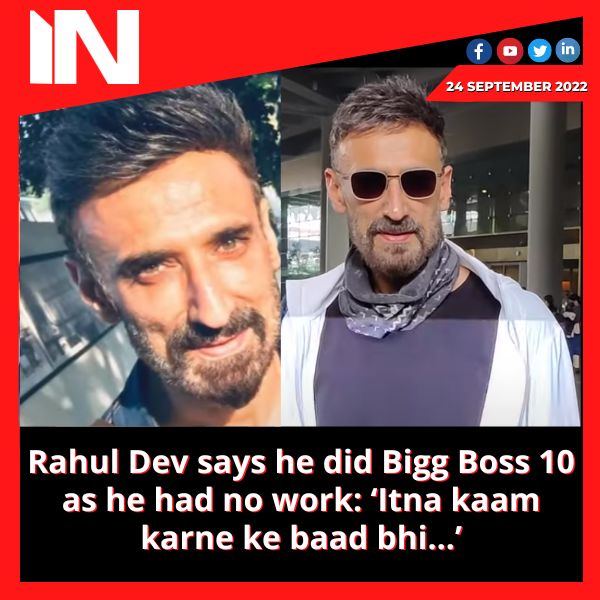 Rahul Dev talked candidly about his career’s ups and downs in a recent interview. He claimed that after spending so much time working in the film industry, he was forced to take part in Bigg Boss 10 due to a lack of employment options. He continued, saying that his absence lasted four and a half years, which is a “long period.” Among other things, he discussed launching a fitness company.

Rina Dev, the actor’s wife, passed away in 2009 following a cancer fight. They spent almost 18 years together, 11 of them as a married couple. Raising their son required Rahul to take a vacation from acting. He recently admitted that after his kid left for college abroad, he had to overcome a number of obstacles to get back into the business.

“I launched a fitness brand, but it was unsuccessful for me. I set out to complete six tasks; it was my second venture. I made the decision that I could now return to Mumbai and work on (my) acting profession when my kid left for college in England. Itna kaam karne ke bad bhi Bigg Boss, or phir aap sochiye (Despite having done so much work, I had to do Bigg Boss). I took part in Bigg Boss 10 since I could not find any work. Given how quickly markets change in our industry, I won’t hold anyone accountable. Four and a half years is also a long period, according to Rahul, who spoke to Connect FM Canada.

Rahul has been dating actor-model Mugdha Godse for more than eight years. The actor also discussed his difficulties as a parent. Parenting is not at all simple, according to Rahul in the same interview. Women play a significant role in raising children because of the way they comprehend them—likely because it comes naturally to them. I made a lot of attempts to maintain the same level of patience they do with kids, but there were occasions when I would lose my composure. I had to try to be both a parent and a mother. I mostly saw mothers at parent-teacher conferences at my child’s school. Rarely did I encounter a person without his wife being present. I would experience a deep sense at that time.

Rahul has appeared in a number of movies, including Champion, Omkara, Arsangam, Torbaaz, and Raat Baaki Hai. He also appeared in the television programme Devon Ke Dev…Mahadev. Alongside Kiccha Sudeep, Rahul will soon appear in the Kannada film Kabzaa. Upendra and Shriya Saran are among the actors, while R Chandru wrote and directed it.