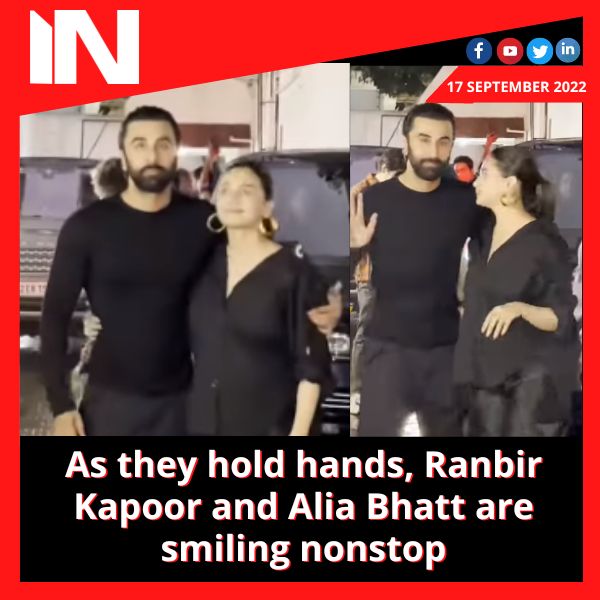 The paparazzi caught sight of Alia Bhatt and Ranbir Kapoor on Friday at the Dharma Productions office in Mumbai. A paparazzo account posted a video of the couple posing for photos together on Instagram. The actors matched their black attire for the outing. Alia sported a black top, jeans, and heels. Ranbir Kapoor chose a black sweater, pair of jeans, and pair of sneakers.

In the clip, Alia and Ranbir held each other as they gave different poses. Alia asked Ranbir something to which he nodded making her laugh. He also smiled as Alia leaned towards him. Reacting to the clip, fans showered them with love. A person wrote, “Twining husband-wife, they look so cute.” Another comment read, “The way he is holding her… he is totally mature.” One fan commented, “They are blessed with much! See their cute smile.”

In order to promote their most recent film, Brahmastra Part One: Shiva, Alia and Ranbir have been quite active. The movie, which is directed by Ayan Mukerji, also features Amitabh Bachchan, Mouni Roy, and Nagarjuna. Alia and Ranbir work together onscreen for the first time in this movie. On September 9, the epic fantasy-adventure movie was released. Director S S Rajamouli is presenting the Tamil, Telugu, Malayalam, and Kannada versions of the film, which is now playing in theatres in Hindi in 2D, 3D, and IMAX 3D.

In its first week of release, Brahmastra has already amassed a gross worldwide box office receipt of 300 crore. On Friday, Star Studios and Dharma Productions provided an update on the movie’s box office results in a press release. Part One of “Brahmastra”: Shiva brings “A roaring week one of Rs 300 cr GBOC worldwide brought unprecedented joy to the film business, theatre owners, and audiences,” the statement said.

Alongside Anil Kapoor and Bobby Deol, Ranbir will appear in filmmaker Sandeep Reddy Vanga’s upcoming mafia drama flick Animal. In addition, he will star alongside Shraddha Kapoor in the next, untitled romantic comedy directed by Luv Ranjan, which is scheduled to open in theatres on March 8, 2023.

Anuv Jain, a singer, says that women love me to their boyfriends

Kangana Ranaut calls PM Modi ‘most powerful man’, wishes him on his birthday