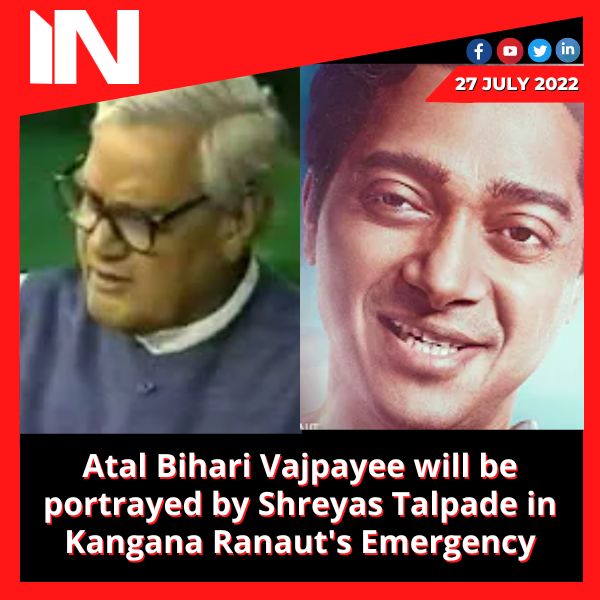 The first image of Shreyas Talpade from Kangana Ranaut’s forthcoming movie Emergency has been released. He’ll play the young Atal Bihari Vajpayee in the movie. In her film, which she also directed, Kangana portrays former Prime Minister Indira Gandhi, and Jayaprakash Narayan is portrayed by Anupam Kher.

Introducing @shreyastalpade27 as Bharat Ratna Atal Bihari Vajpayee in #Emergency, a true patriot whose love and pride for the nation were unmatched and who was a young, budding leader during the time of Emergency, Kangana Ranaut said on Instagram on Wednesday.

A fan responded to Kangana’s post by saying, “Star cast is great.” “Wow,” remarked one more. In Emergency, all the amazing stars congregated. Wow, what a choice, another enthusiast exclaimed.

Shreyas posted a photo of his poster and one of Atal Bihari Vajpayee’s well-known poems, Kadam Milakar Chalna Hoga, on Instagram. Along with it, he added the following: “Honored and thrilled to play one of the most beloved, visionary, a true patriot, and man of the masses… Swachh Ratna The late Atal Bihari Vajpayee. I’m hoping to meet everyone’s expectations. I appreciate you casting me as Atal ji, @kanganaranaut. Although you are without a doubt one of the most gifted and versatile actresses in our nation, you are also a skilled director of actors. It’s #Emergency time! Bappa Morya, the Hindu god.

Emergency, which Kangana both wrote and directed, tells the tale of a turning point in Indian politics. The script and dialogue for Emergency, which debuted this month, were written by Ritesh Shah, best known for his work on the Pink film. The movie is a Manikarnika Films production, with Renu Pitti and Kangana serving as producers.

Advertisement
Related Topics:atalbiharivajpayeeemergencyKanganatalpade
Up Next

Before beginning her career in movies, Richa Chadha nearly conducted an internship interview with Abhay Deol