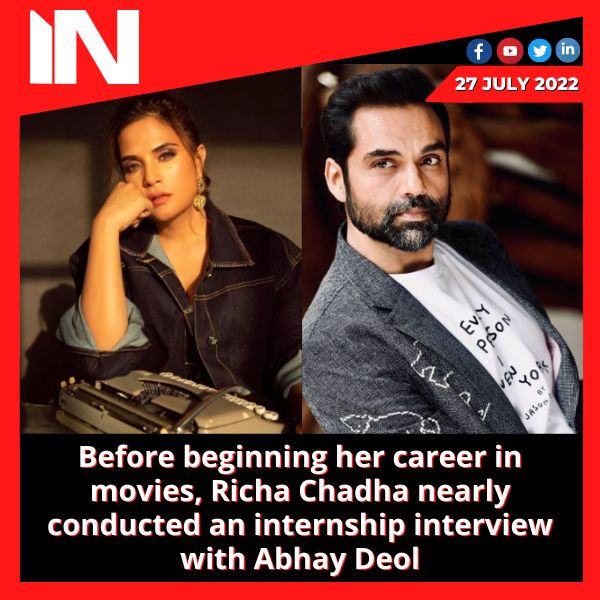 In a recent interview, Richa Chadha discussed her life in Mumbai and how she got into acting. Before being cast in Oye Lucky! Lucky Oye!, Richa claimed she first tried her hand at acting in a play. The 2008 film featuring Abhay Deol was Richa’s acting debut. Richa admitted that when she was an intern, she came close to interviewing Abhay for a magazine. The actor remembered speaking with her on the phone months before they were paired up in a movie.

Richa declared that she wished to work as a journalist. When she was an intern at a magazine, she claimed she first spoke with Abhay Deol. Richa also explained why Abhay turned down her request for a “fashion feature” at the time because he had already committed to movies like Dev D.

The last time I phoned Abhay for an interview, I said, “Sir, we want to do an inside fashion piece with you. I doubt even Abhay knows that. By that time, he had worked on a few movies, including Socha Na Tha and Ahista Ahista. And he was ascending. He got up with movies like Dev D. He said, “Give me a cover then, not now,” since “I have multiple projects as the lead next year.”

The guy has lucidity, I thought. I started working with him six months later. That was really great,” Richa stated in an interview for The Bombay Journey on Mashable India.

She also discussed their Oye Lucky! appearance along with Abhay. Oh, luck! “I guess everyone is anxious for their debut movie, and I entered thinking he was Dharmendra’s nephew. He was quite charming. I enjoyed working on that movie. Some of the other actors and I are still friends,” Richa stated.

The Great Indian Murder, a new Disney+ Hotstar series, was where Richa was last seen. She has appeared in movies including Masaan, Fukrey, and Gangs of Wasseypur. Among her forthcoming projects is the third chapter of the Fukrey franchise, and she also has the fourth season of the web series, Inside Edge.

Advertisement
Related Topics:abhaydeolbeforecareerinternshipInterviewMoviesrichachadha
Up Next