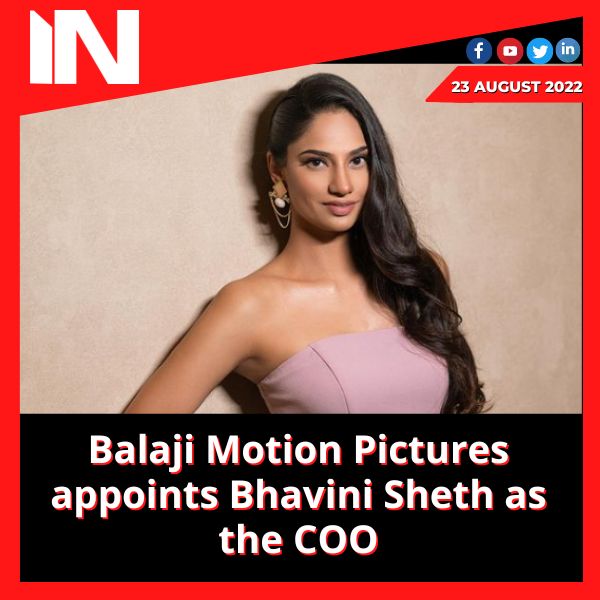 MUMBAI: Bhavini Sheth has been hired by Balaji Motion Pictures to serve as the chief operations officer (COO). Bhavini will be in charge of designing the new film slate, detailing the studio’s commercial strategy, launching new revenue streams, and working with a new set of talent in her new role as head of the studio at Balaji Motion Pictures. Bhavini and Ekta Kapoor will collaborate directly.

“We are thrilled to welcome Bhavini to our Balaji family and are certain that she is the appropriate woman to take the brand to the next stage of growth and newer heights,” said Balaji Telefilms joint managing director Ektaa R. Kapoor. She has a strong reputation and is an experienced leader. As the new COO of Balaji Motion Pictures, she will undoubtedly benefit the business with the knowledge gained from her successful career in the sector.

Bhavini worked at Amazon Studios as the chief of business affairs for India for four years. She was in charge of all business choices and plans involving the original material in all languages, including well-known programmes like The Family Man and Mirzapur and up-and-coming foreign shows like Citadel.

Bhavini Sheth, chief operating officer of Balaji Motion Pictures, stated that the company “has always aimed to stay ahead of the curve and create unusual and passionate stories that stand out.” I am honoured to be a member of the studio’s executive team because it is one of the most renowned entertainment businesses in the nation.

She went on to say, “Working with some of the most powerful female leaders and visionaries of our day, including Shobhaji and Ektaa, is undoubtedly a worthwhile experience for me. It was always in my nature to produce, and now is the perfect time for me to start working in the film industry. I can’t wait to embark on this new adventure with Balaji Motion Pictures.”

Sheth brings with her ten years of strong professional experience in the entertainment industry and a wealth of knowledge in content production.

She is an attorney who practised law and started her career at Naik Naik & Co. She later opened her own firm where she counselled and planned business ventures and mergers for some of the most well-known and prosperous actors, producers, and studios to establish valuation and intellectual property (IP).