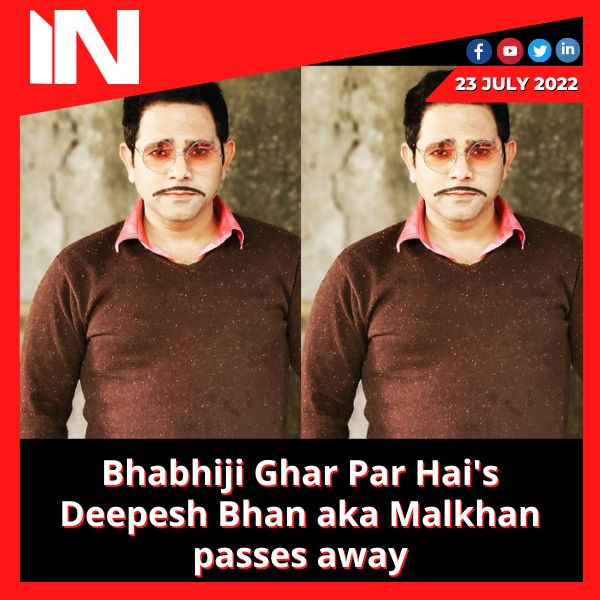 Deepesh Bhan, an actor well known for playing Malkhan in Bhabhiji Ghar Par Hai, is dead. Not just his fans, but also his other musicians in the business, were shocked by the news. Kavita Kaushik, a television actress, announced Deepesh’s passing on Instagram. She wrote a moving message on Instagram. Deepesh Bhan, a vital cast member of “F.I.R.,” died at the age of 41 yesterday. He was a fit man who never drank or smoked or did anything else to jeopardise his health. He is survived by his wife, their infant kid, his parents, and all of us.

I am reminded of the kindness and respect he showed to everyone he encountered, and I now feel that God chooses to call the good people more quickly. Too devastated to comprehend this; it’s a bad day. Farewell, Deepu.

A well-known name in the television industry is Deepesh Bhan. Comedy Ka King Kaun, Comedy Club, Bhootwala, FIR, Champ, and Sun Yaar Chill Maar are just a few of the shows he has worked on.

He additionally made an appearance in the 2007 movie Faltu Utpatang Chatpatti Kahani.

Swayamvar Mika Di Vohti, according to Akanksha Puri, was not scripted: “Mika and I have been friends, but we haven’t dated”