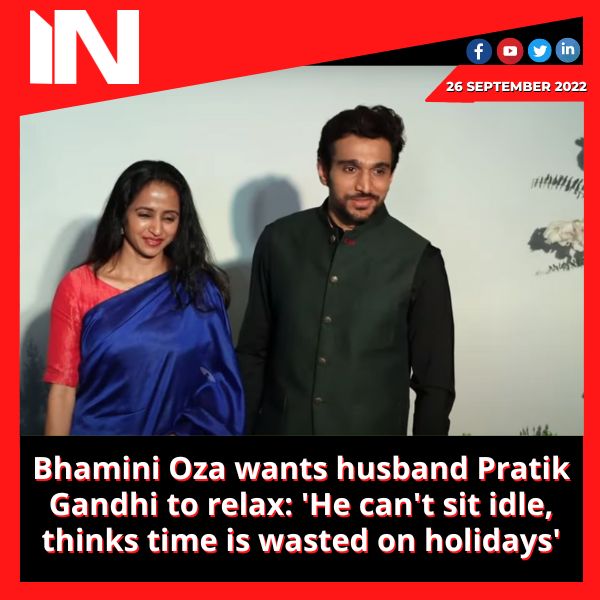 Actress Bhamini Oza claimed that her husband, actor Pratik Gandhi, detested idleness and even thought vacations were a waste of time. Bhamini, who is now starring alongside Abhishek Banerjee in the short film Vakeel Babu on Amazon Mini TV, spoke exclusively with Hindustan Times on the sensitive subject of domestic abuse.
The short film Vakeel Babu explores the social and legal barriers that women in our nation must overcome in order to seek justice when they are victims of domestic violence. Loveleen Mishra and Sumit Purohit both star in the short film.

Bhamini claimed that while she has not personally experienced any domestic violence, she is aware of the delicate nature with which the issue must be handled. “I wouldn’t say that I have specifically “witnessed” incidences of domestic abuse, but I am aware of the issue. I appreciate the sensitivity with which it must be handled. In my immediate social circles, I have not had (such) encounters. But thanks to newspapers and other media, we are all aware of how things work, particularly when it comes to the victim receiving legal support. There must be at least one significant source of familial support for the person to muster the guts.

A woman needs a lot of courage and fortitude, she said, not only to fight but also to speak up for justice. “In order to be and be happy, you must be powerful, realise what you need, and demand it. It is crucial that everyone work toward their own pleasure.

Bhamini has worked in a few films in addition to her more than ten years of theatre experience. When describing the art of storytelling, she remarked, “The fundamental is that storywriting has to be clear and concise. The lines must communicate the vision. Even while plays and movies or television series are very diverse forms of expression, the fundamental process is the same: it all begins with the writer.

She continued by expressing her enthusiasm for the fact that her projects allow her to play a wide variety of personalities. “I enjoy that there is no monotony in life.

Bhamini frequently complains to Pratik Gandhi, according to an earlier interview with Hindustan Times. When asked to list his annoying qualities, the actor responded, “I won’t say annoy me, but he is…he can’t remain idle. He simply wants to work; he is now developing a movie, TV show, or other project. When he is on vacation, he feels that time is being wasted. I believe he ought to unwind and simply be. When he works, I’m sure he relaxes (laughs).

In addition, she discussed her perspective on partnerships, stating that “people are together because they love each other. When they first met, their main goal was to spend the rest of their lives together. It (the relationship) is a procedure where you coexist and cooperate (to keep it thriving). Things cannot be planned. When you first get married, you could have certain beliefs, but years later, those beliefs may change. You must be sincere with both the other person’s and your own satisfaction.