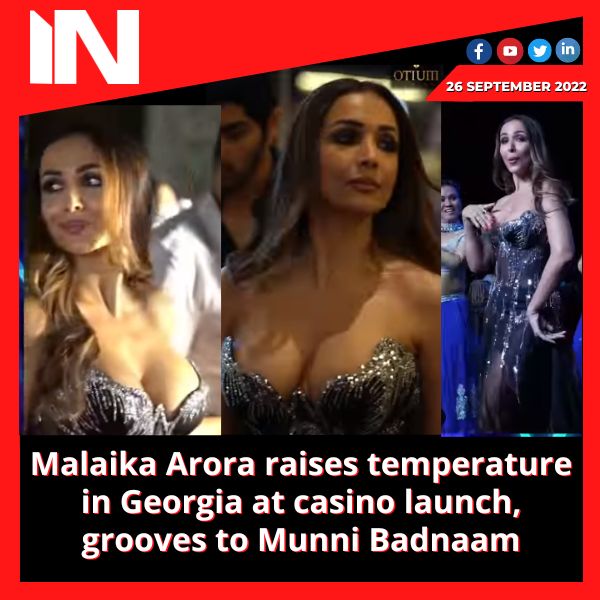 Malaika Arora recently travelled to Batumi, Georgia, for the opening of a casino. She tweeted a clip of herself dancing to her hit song Munni Badnaam Hui during her attendance at the launch ceremony. She stunned her followers with her gorgeous appearance as she arrived at the event dressed in a strapless, shimmering gown.

In the video’s comment area, her admirers referred to her as “beautiful,” “attractive,” and “amazing.” She greeted the guests in Georgian before joining a group of backing dancers in dancing to Munni Badnam.

Malaika is renowned for her fashionable appearances and attire. She has mentioned in interviews that she is now more “experimental” in her clothing selections than she was in the past.

Malaika previously discussed understanding what looks well on her and why she doesn’t care what other people think of her fashion choices. “A woman is usually assessed by the length of her skirt or the plunge of her neckline,” she had said in an interview with Bollywood Bubble. I can’t base my decisions on what other people think of my neckline or hemline. Dressing is an extremely subjective decision. The way you think might not be the way I think, though. I am unable to give it to each and everyone. I should be allowed to make my own personal decisions, and vice versa, so that I am not forced to pass judgement or ask, “Oh, why are you clothing that way?

“If I feel at ease…and in the end, I am not foolish and ignorant. I am aware of my personal best and worst looks. I won’t if tomorrow I think it’s a little too much. But once more, nobody has the right to force their will on me. So be it if I feel confident in my skin, my body, and my age. It’s that simple, you have to get in line,” she continued.