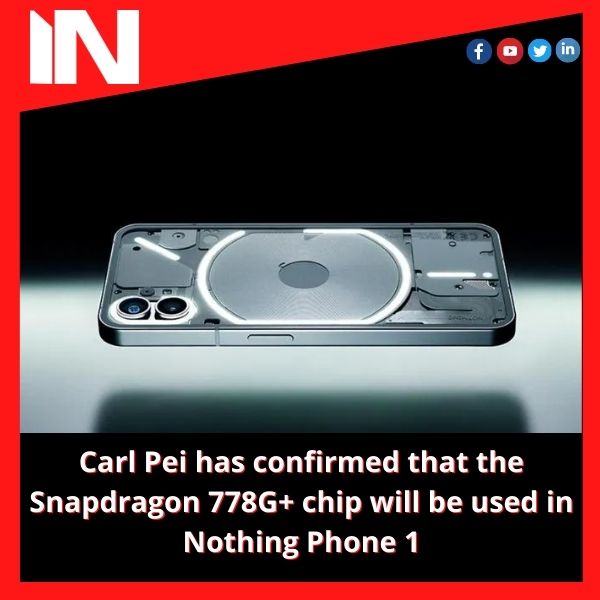 The CEO of the firm, who founded Nothing Phone, has disclosed the chipset that will be utilised in the smartphone ahead of its July 12, 2022 release. Carl Pei revealed that the Qualcomm Snapdragon 778G+ chipset, which is a more recent chipset based on TSMC’s 6nm fabrication process, will be used in the Nothing Phone 1 in an interview with Inputmag.com.

Pei informs the media that Qualcomm has specifically enhanced the Snapdragon 778G+ with two characteristics for the Nothing Phone 1. Wireless charging and reverse wireless charging are some of them. The reason for choosing a mid-range processor is also mentioned by the former co-founder of OnePlus. It is ideal since the Snapdragon 778G+ strikes a balance between performance, battery usage, and price.

Pei thinks that performance on smartphones is now enough for carrying out daily chores. The effective battery life will also be decreased and the price of the smartphone will increase if a flagship chipset like the Snapdragon 8 Gen 1 is used. The Nothing Phone 1 is currently anticipated to retail around $500.

Unexpectedly, the source also shared a picture of the Nothing Phone 1 in black. After a few months, the company that had earlier in the year produced Nothing Ear 1 in white also produced it in black. Thus, it only seems sense that the Nothing Phone 1 will initially be offered in two colour options: white and black.

Indian tipster Mukul Sharma has released a screenshot from his Twitter account that displays the Nothing Phone 1’s Geekbench score and some other information. As can be observed, the Nothing Phone 1 runs Android 12 and has the model ID “Nothing A063.” The entry also discloses the CPU’s designation as ARMv8. Eight cores are stated, with one running at 2.52 GHz, three at 2.40 GHz, and four at 1.80 GHz.

It’s interesting to note that the Nothing Phone 1 receives 2,803 points on the multi-core test compared to 797 points on the single-core test. The processor’s name also confirms that the smartphone would be equipped with an 8GB RAM and 128GB storage Qualcomm Snapdragon 778G+ chipset. On devices like the Motorola Edge 30 and Samsung Galaxy M52 5G, this combination has previously been observed. The Nothing Phone 1 will therefore be a mid-range smartphone, it can be said.