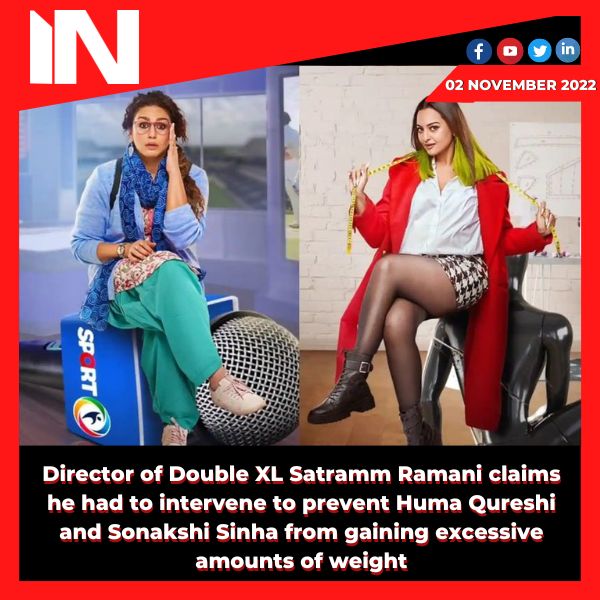 The film Double XL, starring Sonakshi Sinha and Huma Qureshi, is about to be released. The comedy movie tackles topics including body image and body shaming of women. Huma and Sonakshi Sinha play two plus-sized women fighting prejudices, as the title suggests. The movie’s director, Satramm Ramani, spoke to Hindustan Times about the inspiration for the story, mixing humour and emotion, and how he had to watch out for his leads’ weight gain.

A few quotes from the discussion

How did Huma and Sonakshi join the project and what was the genesis of the movie?

Considering that we saw the cast initially, the plot of this movie is different. Huma and Sonakshi from the cast served as inspiration. The story, about which they were both quite excited, then began. I joined the ship after that.

This comedy tackles the delicate topic of body shame and body image. It must be treated delicately. How did you manage to strike the right note between being funny and not offending anyone?

We were fairly clear from the beginning of the writing process that we didn’t want to be preachy or make fun of the problem we were portraying. I don’t want to make light of the subject matter of the movie if it is issue-based. Additionally, I don’t want to offend anyone.

It was very evident to everyone. Fun and humour are present, but we must be careful to avoid offending anyone. The world is funny, but we don’t always make fun of people’s appearance or weight.

As you stated, the actors served as the initial idea. Now, they had to gain weight and seem a certain manner due to the screenplay. Given the criticism female actors in the industry receive for their looks, did they have any concerns about the weight gain?

In no way. These two girls were so obedient that I had to remind them to be in control. I didn’t want them to take things too far. They were sincere about it and committed to it. They consistently insisted that they were there to support my screen preferences. In fact, they said that they would bless you since this is the first time we have a director who will let us eat whatever we want.

No mention of a fatsuit or prosthetics, then?

Not at all! We made savings there (laughs).

There is a misconception that the only Hindi films with a chance of succeeding at the box office this year are those that are extravagant or expensive. Has this slice-of-life movie caused you any anxiety in light of the current political climate?

We present ten reasons why a movie works, but one hundred reasons why it doesn’t. I believe there are several explanations and points of view regarding what is effective and why. That conversation may go on for a very long time. My sole conclusion is that a compelling movie with a compelling plot will succeed. That will receive love from others.

In his first cinematic role, cricket player Shikhar Dhwan makes a brief appearance in the movie Double XL together with Zaheer Iqbal and Mahat Raghavendra. On November 4, it will open in theatres.

Ajay Devgn’s Bholaa will have a special role for a sultry beauty.