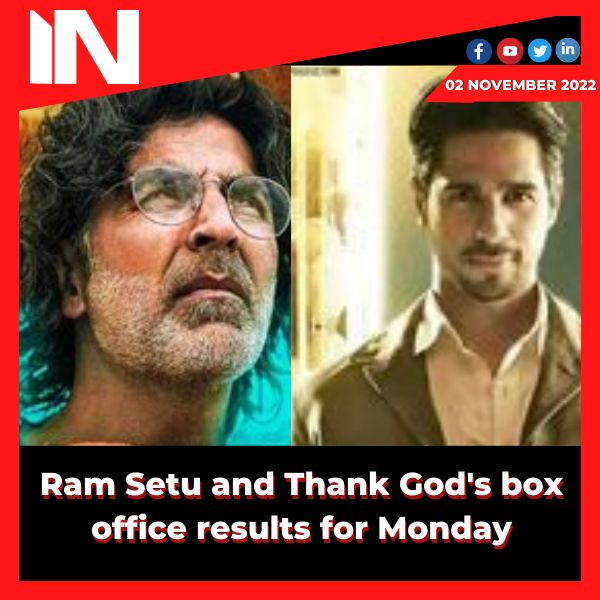 On Monday, as the holiday season comes to a close and normal weekdays resume, both Ram Setu and Thank God experienced expected drops in their audience sizes. With so many holidays included, the target demographic has already seen a substantial portion of the movie; now, one can anticipate lingering foot traffic.

Thank God was at Rs. 3.30 crores on the previous Friday, whilst Ram Setu had earned Rs. 6.05 crores. Now, the Akshay Kumar-starring movie made an additional Rs. 3 crores* on Monday, while the Ajay Devgn-Sidharth Malhotra movie made an additional Rs. 1.50 crores*. Although Ram Setu is somewhat better and is still finding certain pockets, the business is proceeding as planned, therefore there are no shocks in these data.

Thank God, on the other hand, has just not been accepted at all.

Given the calibre of the people involved and the subject matter, they should have made a bigger splash with the movie’s business. If the collections don’t reflect the merits, it’s understandable, but to be so far off is, to put it mildly, perplexing. Ram Setu deserved to make at least Rs. 100–125 crores in revenue, and Thank God had enough left over to stretch its way to a total of Rs. 60–75 crores. Ram Setu is today valued at Rs. 59 crores, while Thank God is valued at Rs. 30.75 crores. However, these sums are now out of reach. Better was due to them both.

Director of Double XL Satramm Ramani claims he had to intervene to prevent Huma Qureshi and Sonakshi Sinha from gaining excessive amounts of weight.

Aries may purchase a new vehicle today (November 2), and Cancerians should show respect to elders.