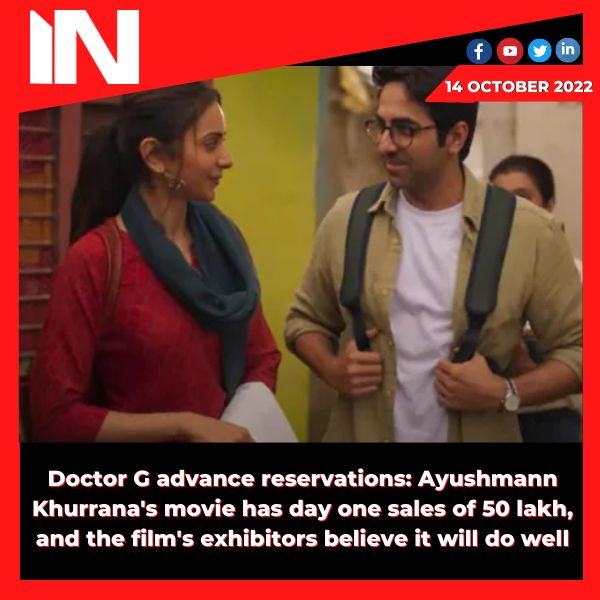 The movie Doctor G, starring Ayushmann Khurrana, opens in theatres on October 14. The mid-sized movie only wants to have a respectable opening and rely on word-of-mouth marketing rather than competing with some recent blockbusters. In the past, this has been the case with the majority of Ayushmann movies. The movie had sold 50 lakh tickets as of Thursday afternoon for its opening day, and it is expected that number to rise to 75–80 lakh by the day’s end. This raises hopes that the movie will have a respectable opening weekend.

Rakul Preet Singh, Shefali Shah, and Anubhuti Kashyap all appear in the social comedy Doctor G. The movie, a comedy entertainer about a topic taboo, centres on the lone male physician in a gynaecological clinic. It is a perfect fit for Ayushmann.

According to industry sources, by Thursday afternoon, the day one advance booking total for Doctor G had surpassed 50 lakh. They might fall short of the ₹ 1 billion barrier. Trade analysts predict that while the movie might have a strong first day, it will likely fall short of some of Ayushmann’s pre-pandemic hits like Badhaai Ho and Dream Girl, which made between ₹ 7 and ₹ 10 crore on opening day. However, given that the movie received an A and is aimed at youth, not family audience, it is still good signs for the film.

Doctor G might still put up a respectable total. Beyond that, a robust word-of-mouth campaign and favourable reviews might position it for a profitable weekend and a strong lifetime gross. The CEO of PVR Pictures, Kamal Gianchandani, states, “We have witnessed viewers enjoy themselves greatly and laugh out loud during the trailer playouts in theatres, and there is a particular affinity towards an Ayushmann Khurrana picture. We are optimistic that he is back with a bang, paving the way for more similarly high-concept films given how the advance bookings have started off with respectable numbers when compared to other mid-budget movies.

Exhibitors are hoping that the movie would end the year-long curse on mid-sized Hindi films. With the notable exception of The Kashmir Files, most box office-successful Hindi films have been big-budget productions. According to Devang Sampat, CEO of Cinepolis, “We have gotten a great response from the Doctor G teaser and are hopeful that this movie will change the course of mid-size films, which have suffered in recent years. The amount of advance reservations we are now seeing is a step in the right direction.

Happy Karwa Chauth in advance, Urvashi Rautela declares while decked out in red and white.