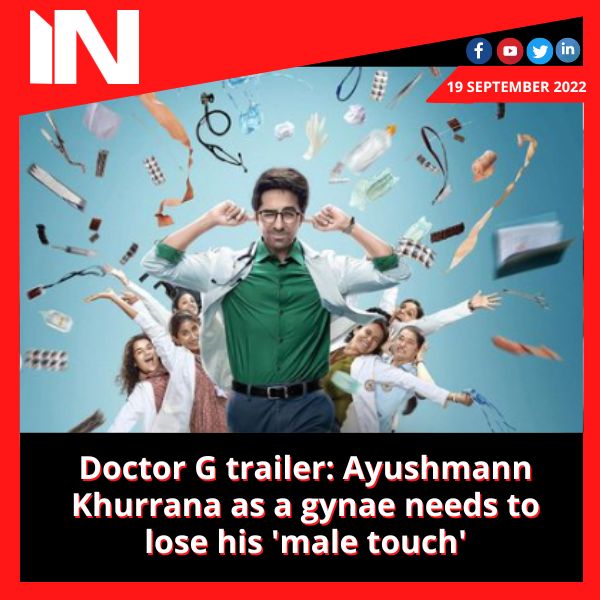 In their next film Doctor G, actors Ayushmann Khurrana and Rakul Preet Singh will play doctors. The movie’s trailer was made public on Tuesday. Sheeba Chaddha and Shefali Shah both have significant roles in the Anubhuti Kashyap-directed movie.

The nearly three-minute-long teaser opens with Ayushmann Khurrana’s character, Dr. Uday Gupta, in hot water after he demanded that his patient take off her clothing at a clinic for a diagnosis. While attending medical school, he seems uncomfortable handling women and says that his career goal is to become an orthopaedic surgeon. In the midst of this, Rakul Preet Singh is viewed as his love interest and coworker. When he finds himself in gynaecology as the lone male student, he engages in some ragging. Ayushmann’s mother is portrayed by Sheeba Chaddha as she uses Tinder to find love.

Ayushmann Khurrana’s senior physician, doctor Nandini, played by Shaifali Shah, counsels him to shed the “masculine touch.” He struggles to get above his fear and comprehend his patient’s issues. He also kisses Rakul passionately in the movie in between the mayhem.

“Gynecology department ki har ek naari, padegi#DoctorGpe bhaari,” Ayushmann wrote in a post sharing the clip. One of the comments said, “Doc Saab delivery ka besabri se intezaar hain,” from a fan. (Awaiting the publication date.) Someone else commented, “This looks too nice.”

Ayushmann previously stated in a statement regarding the movie, “Doctor G is a script that I fell in love with straightaway since it is so original. It is a very original and creative idea that will make you think and laugh at the same time. I’m eager to don the doctor’s coat for the first time in my professional life and, in the process, convey a message that, ideally, will speak to your hearts directly. The motion picture will debut on October 14. It has the support of Junglee Pictures, which worked with Ayushmann on the films Bareily Ki Barfi (2017) and Badhaai Ho (2018).

Akshay Kumar takes Nitara to an amusement park. Here’s why he feels like a hero