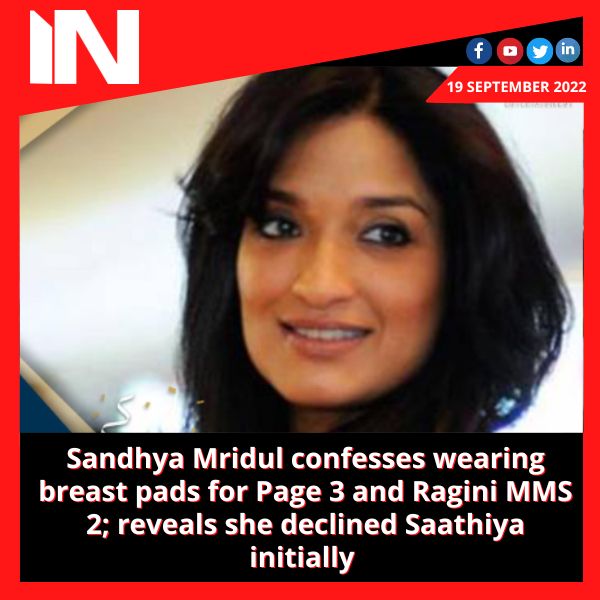 Actress Sandhya Mridul had to deal with comments like “You look vampish,” “Yaar aapki body nahi hai,” “Thoda voluptuous chahiye hota hai,” and “Aap ye laga lo” regarding her figure in the early 2000s. Mridul even published a piece earlier this month detailing how a producer requested her to get a breast job done for a movie. “I said, ‘I’m not going to change my physique for you. You’ll come by tomorrow and tell me to change my nose. No, I won’t. “Apke toh boobs hi nahi hai,” someone said to me. Bola gaya hai mujhe! They stated, “We love you, but we need you to have enormous boobs for the character,” in reference to one movie. I instructed them to “pad me.” Mridul Shares.

Additionally, Mridul casually acknowledges that she did pad herself up for Ragini MMS 2 (2014) and Page 3 (2005): “For Page 3, I wore (breast) pads. I did it for various scenarios. I’ve stated it here. There are characters, such as Ragini MMS, who I only recommended wearing pads for since it is who she is. You, however, cannot order me to find a work. It made perfect sense to me for Ragini MMS.

Other words Mridul had to hear included “chalo beer pila do” and “aap bahar chalne ko tyaar nahi ho.” “You have sun in you. I didn’t put in enough effort because of that, she adds. Mridul assures us that she has made every effort not to work for money and that she will not change her mind about what she wants from her profession. Although I have had periods of incredibly tough financial circumstances, I have resisted giving in.

Mridul acknowledges that after 2007, she went through “a moment of craziness” due to a lack of job opportunities. “That part was incredibly challenging. On the commercial side, I did not see myself, and at the same time, I was not getting the kind of job I desired. Actors today have much better luck. It was quite perplexing and frustrating. The 47-year-old actress, who has appeared in some well-known commercial films including Saathiya (2002), which she initially did decline, claims that she was unable to fit herself into the Heroine mould. “Mujhe jab Saathiya ke liye bola tha na, mene kar diya tha, Yash ji (late filmmaker) ne mujhe. I refused. Only you would play this role, and you would be good at it, according to Yash.

But I told him , I cannot do this, I don’t want to do films. He said, ‘Go and meet Shaad Ali for me’. He was so sweet. Then I did it, and I enjoyed it,” Mridul elaborates.