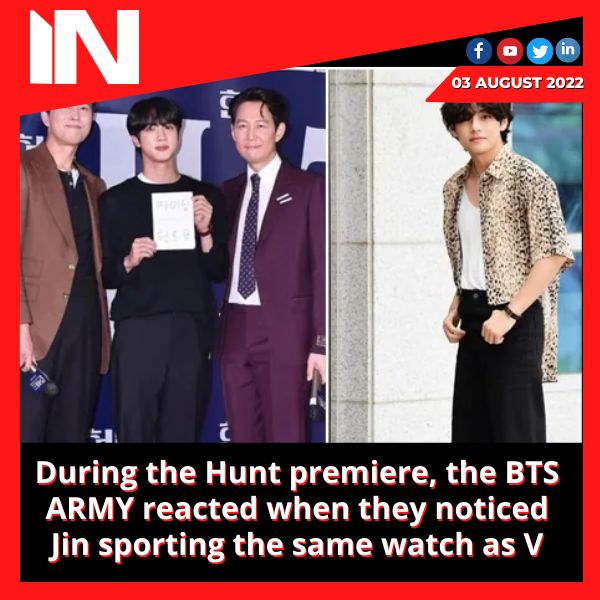 The much-anticipated thriller Hunt, starring Lee Jung Jae, Jung Woo Sung, Kim Nam Gil, and others, had its premiere, and BTS member Jin was there. The singer announced his attendance via Weverse, leaving ARMYs ecstatic to see him attend yet another movie premiere. Jin demonstrated why he is referred to as “Worldwide Handsome” by donning a stylish all-black ensemble for the occasion. The singer also added a vintage watch to his ensemble, which ARMY noted was reminiscent of the watch that BTS member V, aka Kim Taehyung, wore to board a flight to Paris.

Jin wore a black round-neck sweater with coordinating pants to the Hunt movie premiere. The high-rise pants have a baggy silhouette while the jumper has long sleeves with folded cuffs and a figure-skimming fit. The singer completed her look with a messy hairdo, a dewy face, and a pair of white and beige Nike X Tom Sachs sneakers.

Along with his outfit for the premiere, Jin wore a vintage Cartier watch, which reminded ARMY of a similar accessory worn by BTS member V to board a flight to Paris in June of this year. V had chosen the black version of the same vintage Cartier watch while Jin had gone with the Tank Louis model in 18k yellow gold and red leather.

ARMY expressed their joy over this moment of twinning on social media. One admirer wrote, “favourites of mine Taejin always.” “Their Cartier watches are so elegant just like them,” another person wrote. “TaeJin – Tank Louis Cartier Watch enthusiasts,” wrote one fan.

Jin had previously attended the Emergency Declaration premiere, which starred Song Kang Ho, Im Si Wan, Kim Nam Gil, Lee Byung Hun, and others. In the upcoming song Bad Decisions by Snoop Dogg and Benny Blanco, the singer will also appear alongside Jimin, V, and Jungkook. On August 5 at 1 PM KST, the song will make its debut (9:30 am IST).

Advertisement
Related Topics:armyBTSFeaturedhuntnoticedpremiereReactedsportingwatch
Up Next

Here are some hair care hints for the sexiest hairstyle on TikTok, 3D curls