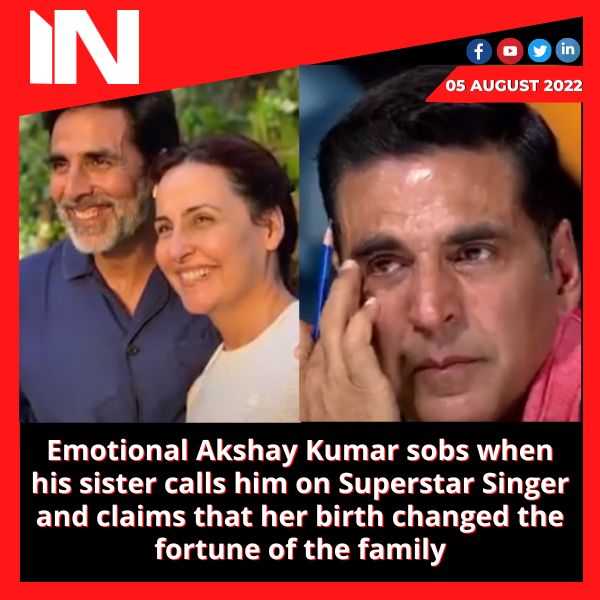 Akshay Kumar recently received a touching audio message from his sister Alka Bhatia, which moved the actor to tears. He appeared as a special guest on Superstar Singer 2, where he heard an audio message from Alka. The actor is currently promoting his movie Raksha Bandhan, which will hit theatres on August 11 in time for the festival.

In the story of Raksha Bandhan, a devoted brother delays his own upcoming nuptials in order to marry off his four sisters. In a brand-new Superstar Singer 2 promo, contestant Rituraj can be seen singing Phoolon Ka Taron Ka by Kishore Kumar. An audio message from Akshay’s sister Alka is playing for him as he performs.

She addresses him in Punjabi as “Raju,” saying, “I just realised while talking to someone that the festival of Rakhi is on August 11. In good times and bad, you were there for me. You filled all the roles for me, from father to friend to brother. I appreciate everything.

After receiving the message, Akshay became emotional and said, while attempting to hold back tears, “We used to live in a small house. Our lives were altered by the arrival of this goddess. There is no stronger bond than the one with a sister.

Raksha Bandhan was written by Himanshu Sharma and Kanika Dhillon and is being directed by Aanand L Rai. In the movie, Sahejmeen Kaur, Deepika Khanna, Sadia Khateeb, and Smrithi Srikanth play the four sisters of Akshay. The part of Akshay’s love interest is played by Bhumi Pednekar.

In addition to Raksha Bandhan, Akshay has a few other movies scheduled for release. In the movie Selfiee, he co-stars with Emraan Hashmi, Diana Penty, and Nushratt Bharuccha. Along with Jacqueline Fernandez and Nushratt, he also has Ram Setu.

Advertisement
Related Topics:akshayklumarBirthchangedemotionalfamilyfortunesistersobssuperstarsinger
Up Next

As she wishes her husband Suraj Nambiar a happy birthday, Mouni Roy gives him a passionate kiss

Recap of Anupamaa: Anupamaa makes a promise to leave the Shah home while Vanraj and Anuj argue