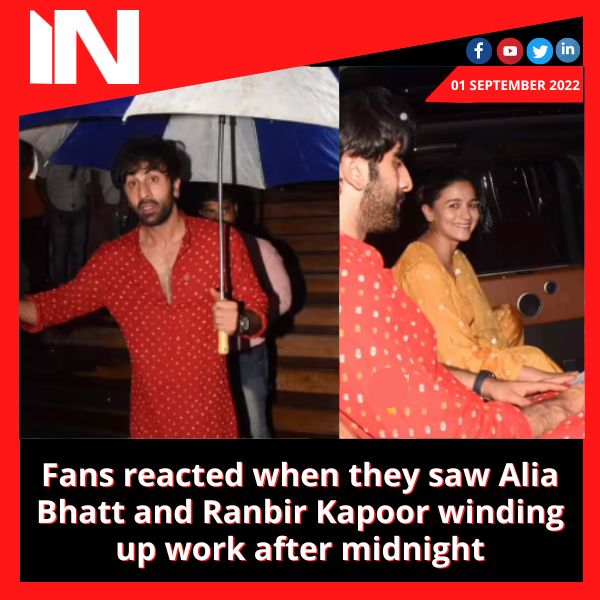 No effort is spared by Ranbir Kapoor and Alia Bhatt in marketing Brahmastra. Even Alia, who is expecting her first child, can frequently be seen outside for movie promotions. The duo was seen leaving a recording studio together after midnight on Wednesday.

Before hopping into the car, Ranbir Kapoor posed for pictures with a good number of his fans despite clearly looking exhausted in a red kurta and jeans. As she sat in the backseat and was photographed, Alia, who was wearing a yellow kurta, was beaming.

He doesn’t appear tired, he’s fatigued, a fan wrote on a paparazzi video of the two of them. They really go well together. I hope you all enjoy their new film when it is released as a reward for their efforts. They are working quite hard, especially Alia during this time of pregnancy, said another. “Oh Goddd the hardest working 2 in the business they seem soo weary but yet give their 100% to their work kudus to you guys,” another fan commented. “Awww they are working hard, they seem so tired.. hope they will be rewarded, can’t wait for Brahmastra,” read another comment.

Brahmastra: Part 1- Shiva, directed by Ayan Mukerji, will debut in theatres on September 9 in the following languages: Hindi, Tamil, Telugu, Kannada, and Malayalam. Amitabh Bachchan, Nagarjuna Akkineni, and Mouni Roy are also featured. Recently, the latter verified Shah Rukh Khan’s appearance in the movie. According to fans, the actor will play Vayu Astra.

Ranbir is making a huge effort to promote his new movie after his most recent release, Shamshera, struggled to do well at the box office. One of the most anticipated movies of the year and Alia and Ranbir’s first collaboration is Brahmastra: Part One Shiva. Due to an incomplete shot and the Covid-19 pandemic, it was repeatedly postponed. The Astroverse trilogy by Ayan Mukerji begins with this movie.

At 17,000 feet, Milind Soman greets Ankita on her birthday and takes a photo with her