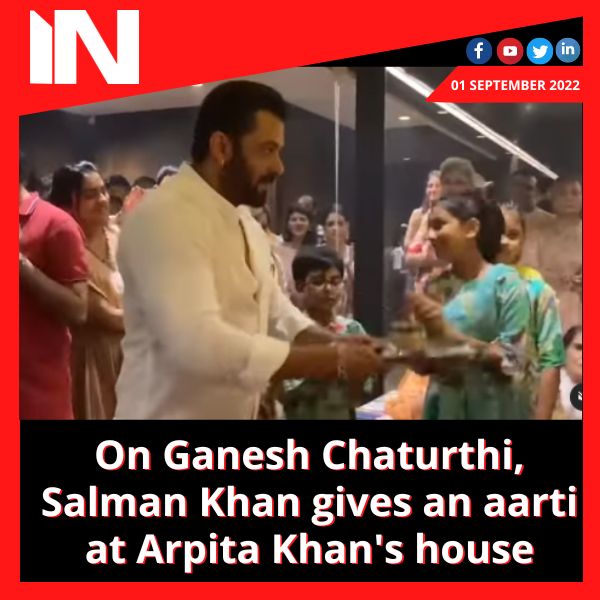 At his sister Arpita Khan’s house in Mumbai for Ganesh Chaturthi, actor Salman Khan conducted aarti. On Wednesday night, Salman posted a video to Instagram showing the celebrations from the inside. Salman chose a white shirt, blue jeans, and black shoes for the event.

Someone gave Salman a puja thali in the video (plate). The actor motioned for a kid who was standing there staring at him to join him. The youngster shook his head, and Salman grinned and began performing the aarti. He grinned and cast a glance at the female who was standing close to the boy.

In the video, Arpita, her actor husband Aayush Sharma, and their son Ahil Sharma performed aarti together. As Arpita stood next to him holding their daughter Ayat, who was dozing off, Salman was also seen dancing to the music being played at the event.

In the video, actor Riteish Deshmukh could be seen performing aarti. Salma, Salman’s mother, was observed relaxing on a sofa close to the altar. The celebrations were attended by many people. To the music, they were spotted clapping. “Ganpati Bappa Morya!” Salman wrote beside the video when sharing it.

Arpita shared many images of the Ganesha idol on Instagram along with the message, “Om Gan Ganapataye Namo Namah @aaysharma.”

Actress Katrina Kaif, who is good friends with Salman’s sister Arpita, visited her before Salman and offered prayers to the god. Vicky Kaushal, her husband who is also an actor, was with her. He grinned for the cameras with Katrina. Vicky chose a yellow kurta while she donned a lime-yellow sharara. Sohail Khan, Salman and Arpita’s brother, was also spotted in front of the house.

On this special occasion, Riteish visited Arpita with the help of his wife, the actor Genelia D’souza. Their kids, Riaan and Rahyl Deshmukh, were with them.