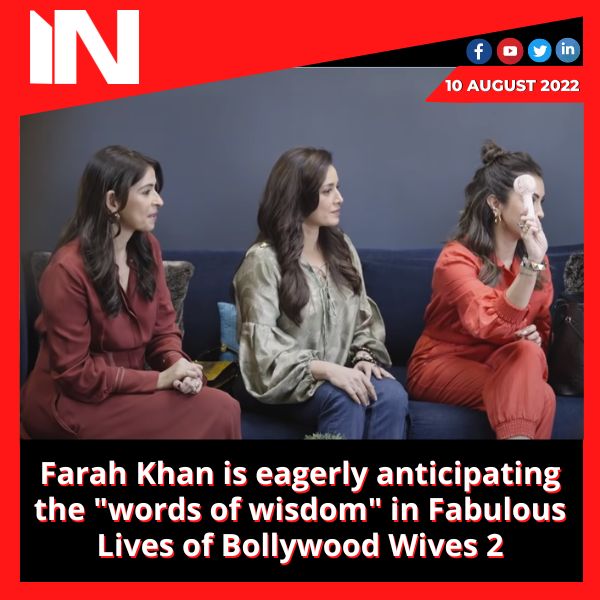 Farah Khan has an intriguing reaction to the Fabulous Lives of Bollywood Wives teaser that has just been released. The choreographer-filmmaker expressed her impatience in a comment on Seema Khan’s post announcing the teaser. For the second season of the Netflix series, Maheep Kapoor, Bhavana Pandey, Neelam Kothari, and Seema Khan team up once more.

Seema, a fashion designer, shared the video and wrote, “Newsflash. This is your formal invitation to re-join the fabulous group! Season 2 of the Netflix-exclusive series is coming soon, so get ready on the count of three. “Can’t wait for your words of wisdom, Kameeniiii,” wrote Farah, one of the first to leave a comment.

Neelam, the wife of actor Sameer Soni and a member of the cast, also shared the video with the caption, “Glam, glitz, and a fresh cup of piping hot tea! Your favourites are returning for an exciting new season, which is going to be wonderful. Dropping soon, only on Netflix.”

Maheep, a jewellery designer and the wife of actor Sanjay Kapoor, posted on her blog, “Things are about to get fabulous, so here’s your exclusive invite back into the inner circle! She posted a teaser clip of Season 2’s return with the Fab 4 on her Instagram.

The new clip has received a lot of love from fans, and the comments sections of all social media posts were flooded with heart eye and fire emojis. The main characters of the show are Neelam, Maheep, Bhavana, the entrepreneur wife of actor Chunky Panday, and Seema.

In a teaser for the second season of the show, Bhavana’s daughter, actor Ananya Panday, asked someone, “Are you pregnant?” Maheep, Bhavana, Neelam, and Seema appeared to be shocked. The filming for the second season, which was announced last year, ended in February 2022. The first season landed on Netflix in 2020.

Advertisement
Related Topics:anticipatingbollywoodeagerlyfabulousFarahkhanFeaturedwisdomwiveswords
Up Next