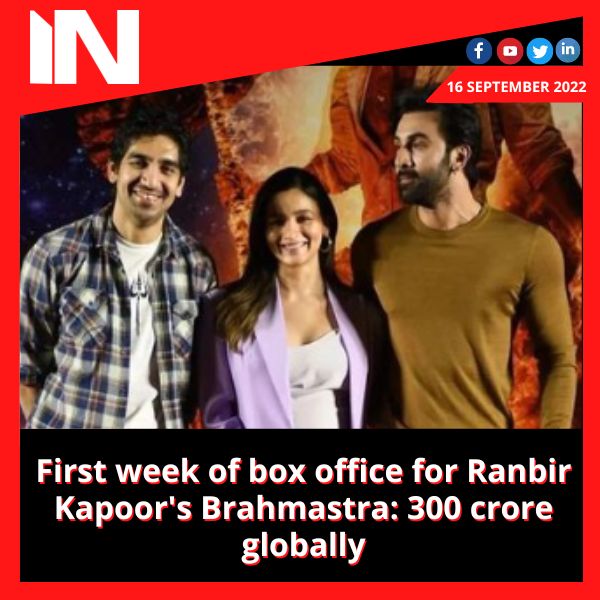 Even though Brahmastra Part One-box Shiva’s office performance dipped throughout the course of its first week, it still managed to surpass the significant 300 crore mark at the conclusion of the week. In India, the movie has made 200 crores gross (or 173 crores net) over the same time span in all of its languages. However, according to trade analysts, the daily dip is a little too big for a movie this size, which could harm its future prospects.

On Friday morning, Brahmastra’s producer Karan Johar shared the movie’s first week’s worldwide box office earnings on Twitter. The producer asserted in a video that the movie had surpassed the 300-crore mark globally.

“Love and light are currently leading the worldwide box office! With a heart full of thanks and joy, I’m starting the second week,” Karan tweeted accompanying the video. Due to the 9/11 anniversary, there haven’t been any major Hollywood releases in the previous week, but Brahmastra has dominated worldwide box office, becoming the highest-grossing movie ever with a worldwide gross of over $38 million (just over 300 crore).

The movie has also performed well commercially in India. Brahmastra made 9 crore nett in India on Thursday across all languages, according to trade trackers Sacnilk and BoxOfficeIndia.com, bringing its first week’s nett earnings to 173 crore. Its gross earnings throughout that time were just over 200 crore.

Though Brahmastra is expected to gross $300 crore in India, that does not automatically qualify movie as a hit. The movie needs to perform well in its second week in order to have a chance of being deemed a hit, given its reported budget of 410 crore. The only thing going in the movie’s favour is that, up until Vikram Vedha and Ponniyin Selvan, no major Indian releases will be competing with it. On September 30, I show up at the theatres.

Ayan Mukerji’s Brahmastra is the first instalment in a trilogy and the beginning of a brand-new cinematic universe. Along with extended cameos from Nagarjuna, Amitabh Bachchan, and Shah Rukh Khan, the movie stars Ranbir Kapoor, Alia Bhatt, and Mouni Roy.

Pankaj Tripathi says he was ‘very much connected’ with Sidharth Shukla