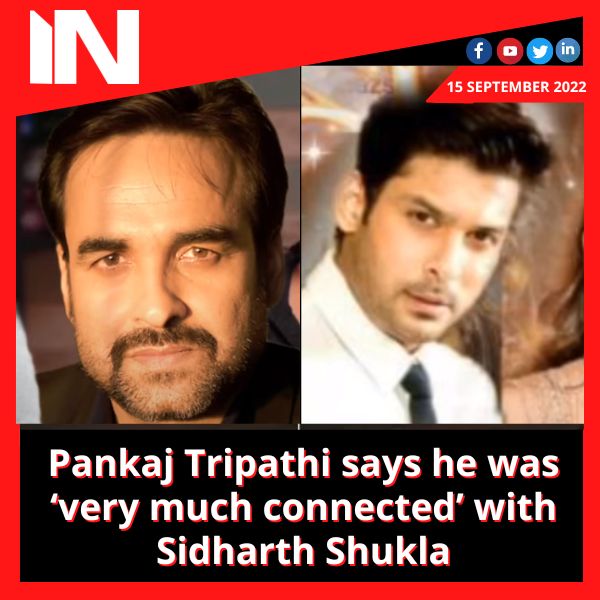 In a recent interview, Pankaj Tripathi discussed Shehnaaz Gill and her alleged deceased boyfriend Sidharth Shukla. According to Pankaj, who had a close relationship with the late actor Sidharth, Shehnaaz reminds him of the latter. At the age of 40, Sidharth Shukla passed away after a heart attack last year.

The most recent appearance of Pankaj was in the June release of the Netflix film Sherdil: The Pilibhit Saga. He will soon be seen with Sayani Gupta and Neeraj Kabi in Oh My God 2. In the most recent episode of Criminal Justice, which also starred Shweta Basu Prasad, Swastika Mukherjee, Purab Kohli, Aditya Gupta, Deshna Dugad, and Gaurav Gera, Pankaj resumed his role as the eerie lawyer Madhav Mishra.

When told that Shehnaaz praised him endlessly when she came on the talk show, Pankaj replied in an interview with Connect FM Canada, “Haan woh mujhe betaur abhineta pasand karti hain uske liye aabhar. I’m grateful. Sidharth’s ki yaad is open to him, Abhi aapne Shehnaaz bola. Sidharth bohot aadar karta tha mera, but Bohot logon ko nahi maalum hai, and Mein bataya bhi nahi hun. She does like me as an actress, she said in Hum Log Kaafi Connected They. I’m grateful. Now, when you said Shehnaaz’s name, I thought of Sidharth right away. Due to my lack of communication, not many people are aware that Sidharth once held a great deal of regard for me. We had a strong connection.

Shehnaaz Gill became well-known after participating in Bigg Boss 13. Shehnaaz and Sidharth, who won the season, won many people over throughout the course of the programme. Last year, on September 2, Sidharth passed away.

In a short while, Shehnaaz will make her Bollywood debut. She is now occupied with the filming of Kisi Ka Bhai Kisi Ki Jaan, starring Salman Khan. The movie, which was directed by Farhad Samji, also features Pooja Hedge and Venkatesh Daggubati. Aayush Sharma, Salman’s brother-in-law, also appeared in the movie. He reportedly left the movie, though.