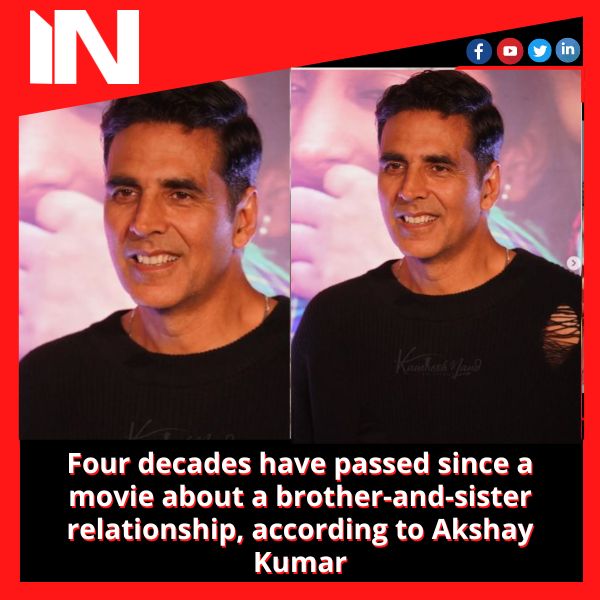 His “driving force” is subjects, and “socially relevant films” are among those that encourage him more. “I can easily make a Rowdy Rathore 2 or Singh is Kinng 2 and make triple the amount of money, but these are social awareness films, and I like making such films because they can make a difference,” actor Akshay Kumar tells us as we catch up with him the day before the release of Raksha Bandhan. I said to my director (Aanand L Rai) that I would consider it a success if even 10 people decided not to accept or offer dowry after watching our film.

In addition, Kumar says that although people don’t frequently consider it, the film contains the fundamental emotion of bhai-behen, jo sabke ghar par chalta hai. We produce movies about all kinds of feelings and connections, but it’s been more than 40 years since we produced a movie about the relationship between brothers and sisters. The last movie about this was probably Tapasya (1976).

Alka Bhatia, Kumar’s sister, and he undoubtedly have a close relationship. And while he was promoting his film on a reality show, viewers witnessed him become incredibly emotional as he received a message from her. I hardly ever get emotional during a show, the 54-year-old claims. However, I lost control when I watched the video in which my sister spoke. Men are strong, we say.

Everyone was interested in the various videos and images from the cast’s promotional tour, and Kumar was seen showering his on-screen sisters with gifts wherever they went. “I asked them what they wanted during a game of ludo, and they said [that] I treat them wherever we go. I have been keeping my promise by purchasing ghewar in Jaipur, chikankari items and kebabs in Lucknow, something from Indore, and jewellery from somewhere.

When he posted on Instagram, “Filmmaking is a cakewalk, par promotions bache ki jaan le lete hain,” he also acknowledged how challenging these tours can be. He explains, “It’s not easy in the morning in Kolkata, the day in Lucknow, and the night in Delhi. However, since we want people to visit theatres, it’s imperative for the business and the economy that promotions take place.

The actor declares the film to be the best of his career and says, “It made me realise how such a simple subject can be amazing.”

“At the end of the day, it’s good films that matter,” Kumar says in reference to competition with films from the South. Many South Asian films failed, while a few were huge successes. Like that, some of our films were successful while others were not.