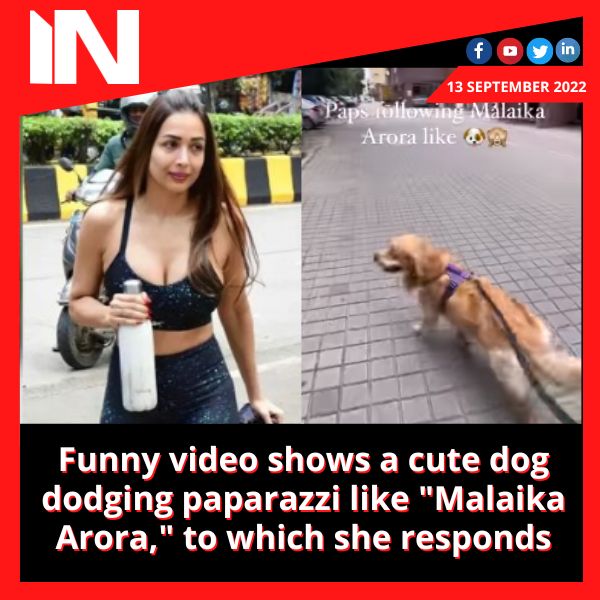 Malaika Arora, a television personality and performer, responded to a post making fun of her for not posing for the paparazzi. A video of a dog with a person walking behind it was uploaded to Instagram by The Pawsome Life of Murphy. The Instagram user made a comparison between Malaika’s journey to the gym and their adorable dog’s stroll in the post.

Malaika was asked to stop and pose for the camera by paparazzi while the audio was substituted with their voices. “Wait, wait Malaika,” shouted one of the voices. You don’t pose, Malaika, a another voice replied.

On the video, it said, “paps following Malaika Arora like.” “Malaika ji aap rukte kyu nahi hai (Malaika)” was the caption that was used.

Malaika responded to the post by writing, “So cute (laughing emojis)” Fans responded to the video as well. Someone wrote, “Why do I adore Malaika’s stroll? I love it.” Oh God, I can’t stop giggling, a different fan exclaimed. How adorable, a user on Instagram commented.

Malaika appears in numerous videos that frequently surface online in which she is not posing for the paparazzi. Malaika frequently posts images and videos of her walking her dog in front of her house on social media. She frequently appears outside of Mumbai eateries, salons, and yoga studios.

Prior to 2017, she was divorced from actor Arbaaz Khan after nearly 19 years of marriage. Arhaan Khan is the name of their son. She’s dating actor Arjun Kapoor right now. Arjun and Malaika had been seeing one other for a while. But neither of them opted to go public with their relationship until recently.

Malaika intends to pursue a career as an author. Her first book, which will be entirely on nutrition, will be written soon. She has also served as a judge on a number of dance and talent reality television competitions, including India’s Got Talent and India’s Best Dancer.