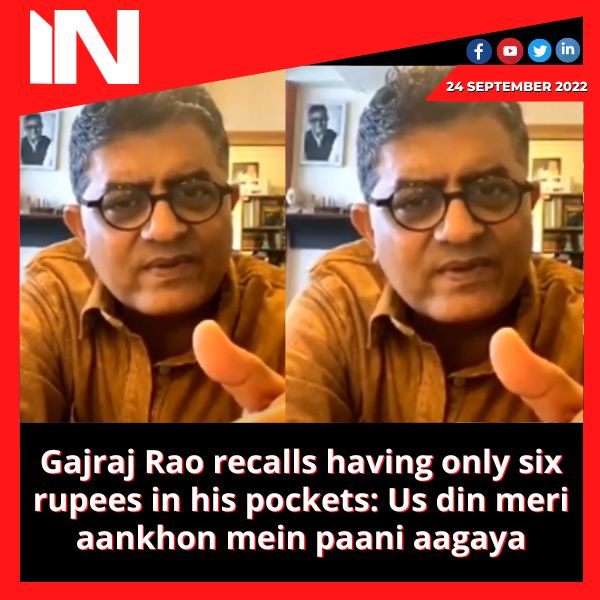 Before playing a role in Shekhar Kapur’s Bandit Queen in 1994, actor Gajraj Rao had to do odd jobs like working at a tailoring and stationery shop. While mentioning this, Rao in a conversation reveals that he even wrote for Hindustan Times back in 1989, something that many are still not aware of. He interviewed iconic personalities like Mehmood, Utpal Dutt and filmmaker Yash Chopra during his stint.

“Dhakke bahut jyada khaye hai mene (Life mein). I didn’t have a carefully planned existence due of the financial circumstances in my home. Not all the power was in our favour. Thus, I’ve learned a lot from these occupations. Rao tells about his life before being an actor, “I always say this bohot badi mushkil waali zindagi thi but I had the fire in me that I want to achieve something and give a nice life to my family.

Rao, who is originally from Delhi, used to frequently travel to Mumbai to look for job before his acting career took off. Rao shares his heart as he recalls a time when he only had six rupees in his pockets: “Before moving to Mumbai, I visited the city in search of employment. I was composing a script while spending a month at my friend’s house. Paise mere khatam ho gaye the at that time. I drove all the way from Andheri to Worli to read that script, but they didn’t like it. 5-7 rupaye the meri jab mein kul mila. I was at a loss for what to do.

Should I spend those six rupees on a local rail to get home or on food instead? I will receive a payment in advance if my script is approved, which is mujhe pure umeed thi. Us din meri aankhon mein paani aagaya ki main karunga kya? Wo jo thana.

Rao adds that in order to return to Delhi, he borrowed 500 from a friend. After hearing what I told him, he gave me 500 rupees. In those days, that was a sizable sum. Because of the circumstance that exists in my case, Sharmindagi bhi ho rahi thi mujhe ye sab karna padra hai. However, I learned through this experience that I shouldn’t rely on promises made by others.

The producer who phoned me had stated, “Chinta mat karo, even if the script doesn’t work… He didn’t follow to his words,” the Badhaai Ho actor explains.

The actor, who will shortly make his teleplay debut with Gunehgaar by Akarsh Khurrana, is incredibly happy and appreciative of his path. “Even when I used to receive minor roles, I would often observe that some actors with greater talent than I did not receive any work at all, although I did. I’ve known for a long time that I want to maintain my financial stability. My financial situation caused me to come from a less than ideal existence, so kheech taan ke ghar chalte the Aapke pariwar ki bhi hoti hai, aapki jo struggle hai aapki nahi hoti. I made the decision that udhar na lena pade acting ka shauk tab karo jab jeb mein paise ho.

Rahul Dev says he did Bigg Boss 10 as he had no work: ‘Itna kaam karne ke baad bhi…’