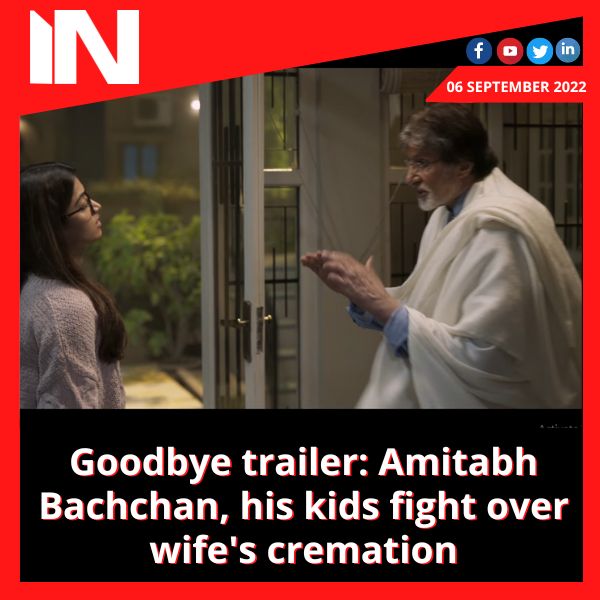 The children of the Bhalla family are portrayed in the trailer as they struggle to accept the loss of their mother, who is portrayed by Neena Gupta. Amitabh, her husband, wants to bury her in a customary manner, but Rashmika, his daughter, objects to all the outdated customs. She resisted understanding the justification for doing things like tying her mother’s toes, stuffing cotton in her nose, and other things that the rest of the family and friends are doing.

Her brothers are the same. One claims to be stranded in Dubai and places an order for a butter chicken feast, while another declines to shave his head in preparation for the dying rites. The father is disappointed in how uncaring his children are about everything.

The Queen actor Vikas Bahl is the director of Goodbye. He was mentioned in India’s 2018 MeToo campaign. Later, he was exonerated of these charges.

GoodBye, a movie produced by Ektaa R. Kapoor’s Balaji Motion Pictures in collaboration with Good Co., is scheduled for a worldwide cinema release on October 7th, 2022.

In a previous interview with Hindustan Times, Pavail Gulati discussed the movie, stating, “It is produced by Ekta Kapoor and directed by Vikas Behl. There is a lot of humour and drama in this family-friendly entertainment. It centres on a family that is going through a difficult time. The soundtrack was composed by Amit Trivedi. I cannot wait for the release of the trailer. I’m making my first attempt at comedy. Though I was quite scared before participating, I had a great time.

In an unreleased photo, Priyanka Chopra smiles and plays with Malti Marie. “My entire heart”