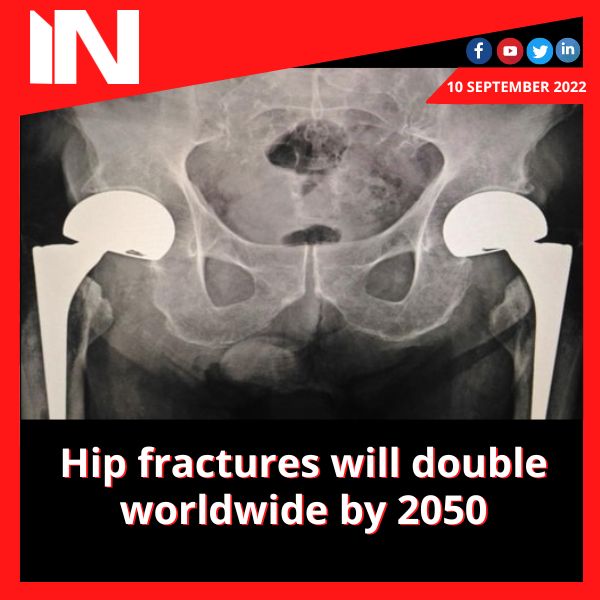 A recent study headed by researchers at the University of Hong Kong found that osteoporotic hip fracture, currently a dangerous and disabling problem for senior people worldwide, is likely to get worse as people get older and weaker. The study’s findings underscore the need for more research, prevention, and treatment of osteoporosis and fractures, particularly in men and adults over 85 years of age.

Associate Professor Ching-lung Cheung from the Department of Pharmacology and Pharmacy at the University of Hong Kong delivered the research presentation today at the annual meeting of the American Society of Bone and Mineral Research in Austin, Texas.

For patients 50 years of age and older who experienced hip fractures between 2005 and 2018, the study examined data from 19 nations. It was shown that an overall increase in the number of hip fractures was projected over time in 18 of the 19 countries. Hip fracture rates were projected for 2030 and 2050 using World Bank population estimates. By 2050, compared to 2018, hip fracture rates would likely double globally, with men having a larger proportional increase than women.

The study identified a few possible reasons for the gender gap. Although the majority of the countries had a decline in the occurrence of hip fractures during the research period, men experienced a smaller decline than women. Men are living longer as a result of advancements in healthcare, personal hygiene, diet, and other areas, while this is taking place. The average life expectancy for men will reach over 75 years by 2050, according to the United Nations, which is the age range where this study identified a significant risk of hip fracture. Researchers predict that as a result, more men will have a high risk of hip fracture.

Dr. Cheung claims that osteoporosis in men has similarly gone unrecognised and untreated for a very long time. In addition, men are 30% to 67% less likely than women to take anti-osteoporosis medications after sustaining a hip fracture, according to our study, he continued. Therefore, prevention and treatment of male hip fractures need to receive more attention.

Previous research on the frequency of hip fractures was based on outdated information from several study methodologies and historical periods. This study examined the most recent secular changes in hip fracture incidence, mortality, and post-fracture pharmacological therapy across 19 different countries.

A common protocol and data model were employed to offer similar data across all sites. Using age- and sex-standardized data, the annual incidence of hip fracture, death, and rates of pharmaceutical therapy were calculated.

By doing descriptive analyses on healthcare data at the patient level, the researchers were able to identify substantial differences among the 19 nations they examined. 180 hip fractures per 100,000 individuals were estimated to occur globally, accounting for age and sex (Women 236; Men 118). The annual change in the incidence of hip fractures, however, varied from -2.8% to +2.1% on average. Hong Kong (2.4%), Singapore (2.8%), and Denmark (2.8%) saw the highest decreases in fractures.

According to co-author and research assistant professor Chor Wing Sing, additional in-depth research is required to ascertain the reasons for the observed variation among nations. The expert speculates that some countries’ comparatively significant declines in hip fractures may be due to improved osteoporosis treatment and post-fracture care. Improvements in fall prevention programmes and more exact clinical care standards probably played a role. According to Dr. Sing, an increase in bone mineral density, or BMD, as a result of people’s greater awareness of bone health, may also have been beneficial. She cited research showing that women over 50 had started becoming more active and engaging in more weight-bearing activity, which had led to one of the biggest decreases in hip fractures in Hong Kong.

The authors of the current study state that the reduction in hip fractures that has happened in many countries in recent years cannot totally offset the effects of the ageing population. Hip fractures are predicted to increase in frequency. However, many countries still lack adequate post-fracture treatment. The incidence of hip fracture in people over 85 (the “oldest old”) continues to be more than double that of other age groups, despite the fact that post-fracture care in this population is often conservative. A bigger and better coordinated effort will be needed from healthcare professionals, patients, and caregivers to prevent hip fractures, close the treatment gap, and improve post-fracture care, especially in men and the elderly. In the entire planet, there is an urgent need for this.

Children with temporary facial paralysis can recover without treatment: Study