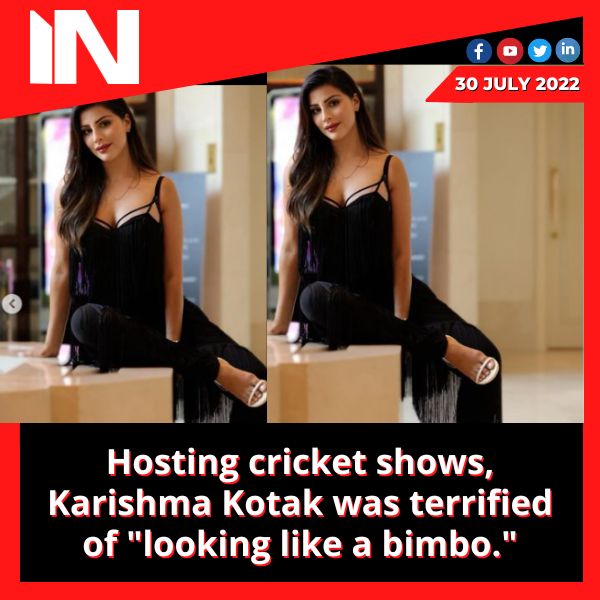 Karishma Kotak, an actor and model who frequently hosted pre-match shows at cricket competitions, has spoken out about how it has been for women at such events. Karishma recalled that when she first began hosting, the goal was for women to dress glamorously and ask a few questions. ‘I was very paranoid that I shouldn’t look like a bimbo,’ Karishma continued.

In 2012, Karishma competed as a contestant on season 6 of the reality series Bigg Boss. She has hosted the television programme Extraaa Innings T20, which features a post-game analysis of the 2013 Indian Premier League. She presided over the 2019 Cricket World Cup as well.

“I feel that now it’s much better than when I started in 2011–12,” Karishma said in a statement to News18. But Mandira (Bedi) got going first. Prior to me, Shonali (Nagrani) started. So it seemed to me that a few women had kind of paved the way. It wasn’t unusual for another girl to be hired as an IPL host because they were already there, but I believe that initially the protocol was more along the lines of “Glamorous dikho, chaar sawal karo and nikal jaao” (Look glamorous, ask a few questions, and then leave). How does it feel to play alongside Dhoni? It used to be those simple questions, and I was terrified I should not appear to be a bimbo.

She continued, “I think stereotypes about women emerge quite quickly, and I think it happens even at work, where we have to put in extra effort to show that we’re more than just pretty faces. I sat down in the commentator’s box and listened to them commentate because that’s how you learn, so when I did feel that way a little bit, that’s when I did it. I know what I’m doing and I know what I’m saying. Because you’re sitting down and watching, you get the inside scoop because what you see as a commentator and what you see as an audience are two different things. I used to just listen, and I still do. I believe it is much better now.

Karishma is currently anticipating the debut of her Sam Bhattacharjee-produced movie IRaH. The artificial intelligence theme of the film, which also stars Rohit Roy, Ameet Chana, Fagun Thakrar, and Rajesh Sharma, is explored.

Recap of Anupamaa: Anupamaa makes a promise to leave the Shah home while Vanraj and Anuj argue

Four days after his father’s passing, according to Paras Kalnawat, he began filming for Anupamaa