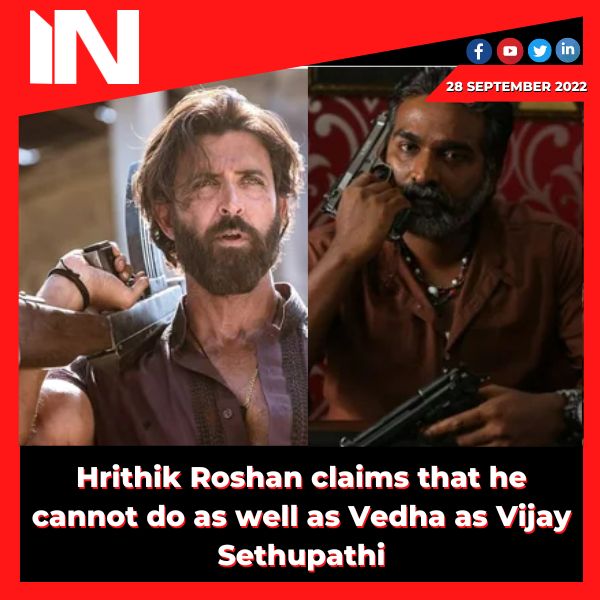 After a long absence, Hrithik Roshan is making a comeback on the big screen. Vikram Vedha, his impending release, will be his first in more than three years. Since then, a lot has changed in the landscape of the industry, but a lot has also remained the same, most notably the fact that a Hrithik Roshan picture still creates a significant amount of talk. Prior to the movie’s release, Hrithik spoke with the media in Delhi about what to anticipate from it, his “comeback,” and the reasons he has been picky in his career.

The 2017 Tamil hit film of the same name starring R Madhavan and Vijay Sethupathi, and directed by Pushkar and Gayathri, is the source material for Vikram Vedha. Comparisons started as soon as the teaser was posted, and the director team also handled the remake. Hrithik responds to that question from Hindustan Times with an almost zen-like calm. He says, “There is nothing I can do about it, but I have done my part. Making an effort is all I can manage. Just that. I often pray, “Give me the strength to change what I can, the peace to accept what cannot be changed, and the wisdom to distinguish between the two.” When I realise it, I am happy.

But he does say that he is convinced he won’t be able to match what Vijay Sethupathi accomplished in the character’s original portrayal. “I am aware of how superbly Vijay Sethupathi performed the same role. I can’t even imagine reaching that level in my dreams. Nevertheless, I gave it my best effort, and I’m satisfied with the results, adds Hrithik.

The actor is clear that Hrithik’s adoration of Vijay’s talent and performance did not have an impact on his approach to the part. When referring to the original, he says, “You can’t just approach a character and copy what has been done. That’s not a very wise approach to take if you think, “He did it so I will do it.” The simplest approach is to recognise that every person is unique. Therefore, if I approach this the way I see it, it will be different, fresh, and sincere by default.

Before Vikram Vedha, Hrithik’s most recent film was released in October of last year. Has the nearly three-year gap between films increased Hrithik’s anxiety about this one’s prospects? “It’s nothing remarkable; simply the usual anxiety I experience before the release of a movie I believe will do well. There have been a lot of movies that, when they were first released, I was quite certain about because I already knew what people would think. I’m anxious this time because I want this to succeed. I think this movie is fantastic,” he claims.

War, which also starred Tiger Shroff, was a two-hero movie similar to Vikram Vedha. While many famous people are reluctant to share the spotlight, Hrithik claims he enjoys it. To be really honest, I get very aroused. I adore making ensemble or two-hero movies. When a movie has a lone hero, it becomes incredibly lonely. I like having someone around,” he laughs.

In his more than 20-year acting career, Hrithik has only played the lead hero in 25 movies. The majority of his contemporaries have produced more works. Hrithik attributes this scepticism to laziness. He says, “For me, it’s straightforward. I only participate in the movies that I can’t resist. I really just try to say no when I hear a script. But if I am unable to, I proceed. I am incredibly lazy. I don’t wish to act. Films are something I don’t want to do (Mujhe karni hi nahi hain), but I have to make the one that I can’t refuse. There has to be a connection.

Review of the film Chup: Revenge of the Artist: The film’s detractors won’t be silenced

How to receive a Rs 7,000 discount on the newest iPhones and more with the Apple Diwali offer