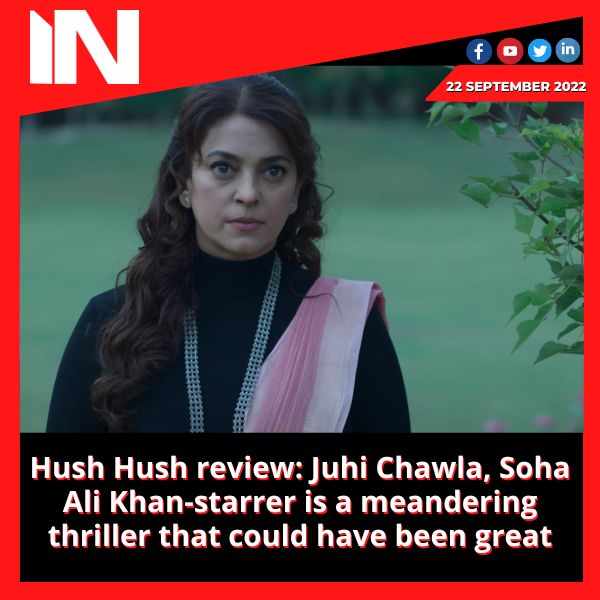 Hush Hush, a new thriller on Prime Video, immediately reminded me of Big Little Lies in its initial teaser video. Both programmes feature female high-society pals caught up in an unplanned controversy. But the similarities stop there. Big Little Lies was a powerhouse, conveying a straightforward story in a gripping way. The opposite approach is used by Hush Hush, which starts with an intriguing premise, sets it up nicely, and then completely loses the story in a way that is absolutely perplexing. Despite all the brilliance and promise it possesses, as well as the early indications of excellent narrative, it ultimately turns into a depressing tale of “what might have been.”

Hush Hush is a drama that centres on four close friends who work as power brokers in upscale Gurgaon: Juhi Chawla as Ishi Sanghamitra, Soha Ali Khan as former journalist Saiba, Shahana Goswami as fashion designer Zaira, and Juhi Chawla as homemaker Dolly (Kritika Kamra). They discover their lives are out of control after an unfortunate event at a party, and they are suddenly involved in a crime that may be too enormous for them to understand. They are being pursued by a sharp officer named Geeta Tehlan (Karishma Tanna) and other unidentified shady individuals as they attempt to save themselves. The show’s premise, location, and tone are all novel and new. It doesn’t feel at all contrived that the cast and crew are all female. Everything is in its proper place, but only initially.

Hush Hush gets going quickly. It does a good job of establishing the people, their histories, relationships with one another, and complex subplots. By the third or fourth episode, you are really immersed in the story and eagerly anticipating its resolution. Tanuja Chandra brings to the lengthy format her expertise as a director of masterpieces like Dushman and Sangharsh. But the reward never materialises. The mystery is not solved; rather, the entire play collapses in on itself.

Any good thriller should have a central focal point where all the loose ends come together and are resolved. Instead, they take a different direction in Hush Hush. After a while, it appeared that the writers were more concerned with creating as many cliffhangers as they could for a future season 2. Although that might always be a good thing, the plot must first come together. A seven-episode arc must have a payout, some emotional closure, and some narratives resolved. Because so many of the subplots and red herrings, quite simply, seem to have little to do with the people or their motivations, they start to feel like distractions.

Hush Hush’s location on the opulent Golf Course Road in Gurgaon, where the wealthy, powerful, and mighty of India live, is what makes it function. The characters’ wealth, influence, and the starkness of the violence in the middle of it all perfectly set up the shock. Anyone familiar with the area would find it more appealing. However, even those who have never visited Delhi-NCR will be able to see how the city serves as a kind of character in the novel, a symbol of decadent power.

Assisting are the performances. Juhi Chawla makes an effort with the little resources she is given in her OTT debut. Even though it isn’t a strong performance, it is sincere. She will never be able to give her character the aura they need, but she may give them the vulnerability they require. Ayesha Jhulka, another 90s Bollywood heroine, serves as her ideal antagonist. The two actors are in some of the best scenes. Additionally, Soha Ali Khan and Kritika Kamra shine, expertly illustrating how high-society living can be a trap for women. Shahana, in my opinion, was dealt a harsh hand because her character was so underdeveloped compared to the other characters.

Despite a changing accent that is at best distracting and at worst irritating, Karishma Tanna’s portrayal of the Haryanvi detective is credible and endearing. Veterans Benjamin Gilani and Vibha Chhibber stand out in small but significant roles outside of the main cast.

Hush Hush struggles because it isn’t sure of who or what it wants to be. It occasionally serves as a criticism on India’s wealthy and corrupt elite. Other times, it serves as a reflection of the nation’s ultra-depravity. rich’s It is also fundamentally a whodunnit. The issue is that the show is incapable of multitasking.

As a result, whenever it emphasises one component, another is hurt. Characters are introduced without context, entire threads and subplots are dropped for an episode, and characters act a little too frequently and conveniently out of character. It’s a sad little example of “what if” and “what might have been,” as I stated. Because it only just partially satisfies that first promise, it feels even worse. Better was due to the talent, both in front of and behind the camera. Like we all do.

Gauri Khan on Aryan’s arrest: Nothing can be worse than what we’ve been through