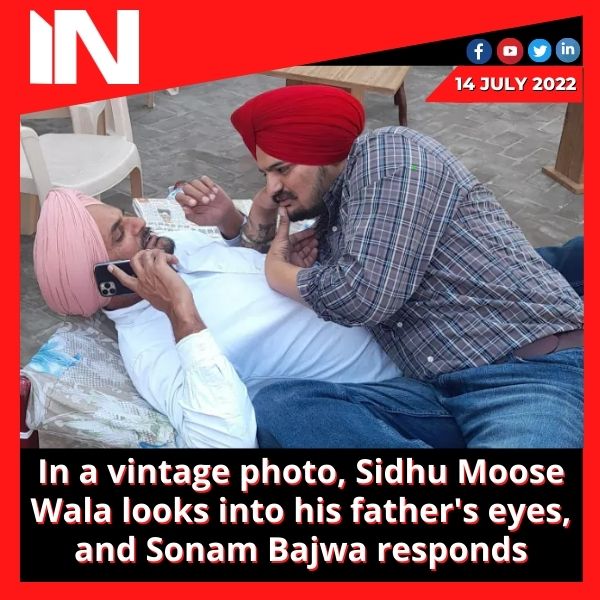 On May 29, the singer Sidhu Moose Wala was fatally shot. On his Instagram account on Wednesday, Sidhu posted an old photo of himself and his father. The vintage photo of the late singer-rapper sparked reactions from a number of famous people, including the Punjabi musicians Sameer Jangid, Jenny Johal, and actor Sonam Bajwa, as well as Sidhu’s admirers.

A heart and a flag emoji were used to share the photo of Sidhu and his father. Sidhu can be seen in the picture looking at his father Balkaur Singh, who is seen sitting on a charpai (bed) and using his phone. Father, your son is a star, Sameer Jangid wrote on their photo, “Bapu tera putt star.”

“Kujj wakhra duniya to ae tu mainu kehnda si,” he added. You used to say, “You are something different from the world. Ess gal teri nu jagg saara ae manda na.” Without you, this world would be dull. “The prettiest photo I came across today,” Jenny Johal wrote. Sonam Bajwa, a Punjabi actor, penned the song “Forever in our hearts.” “Can’t stop my tears,” one fan remarked. One more added, “RIP Legend. Sidhu, we miss you.

On May 29, unidentified assailants shot and killed Sidhu in Punjab’s Mansa district’s Jawaharke village. The incident happened a day after the Punjab Police removed his security, along with 424 other people. The cause of his death was “haemorrhage shock” as a result of antemortem firearm injuries, according to the post-mortem investigation.

The Punjab and Delhi Police have verified that Lawrence Bishnoi’s group was responsible for planning the murder. According to the police, Lawrence’s two accomplices Sachin Thapan and Anmol Bishnoi used phoney passports to leave India. Thapan and Anmol are reportedly on the run, while the gunman and other participants in the murder have been detained by Punjab and Delhi Police.

Advertisement
Related Topics:eyesfatherFeaturedlooksphotorespondssidhumoosewalasonambajwavintage
Up Next