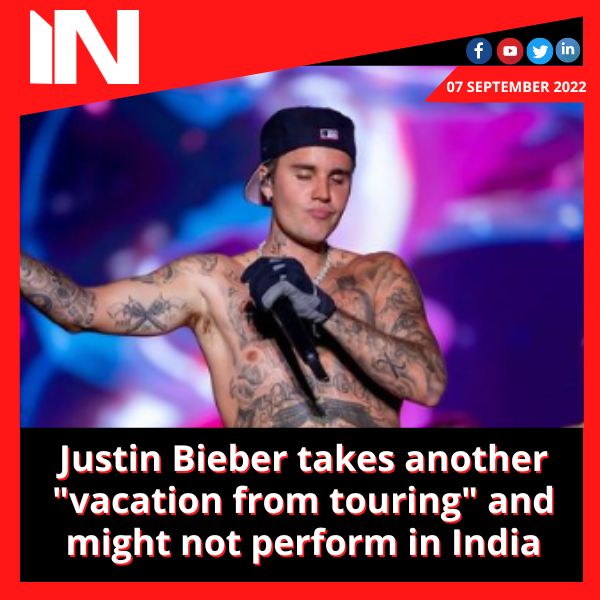 Justin Bieber has once again postponed his Justice World Tour, citing “exhaustion,” and stated that he wants to concentrate on his health. After recently overcoming Ramsay Hunt Syndrome, the singer even gave six live performances in Europe and Brazil. On October 18, Justin was slated to perform at Delhi’s Jawaharlal Nehru Stadium.

Now, Justin stated that he has to “relax and get better.” Early on Wednesday morning, he posted a message to Instagram informing his followers that the planned shows had been cancelled. “Earlier this year, I went public about my struggle with Ramsay Hunt syndrome, when my face was mostly paralysed, in the note, it was written.

This condition prevented me from finishing the Justice Tour’s North American leg. I travelled to Europe in an effort to finish the tour after taking some time to recover and talking to my physicians, family, and team. I put on six live performances, but it was quite taxing on me. Over the weekend, I gave my everything to the Brazilian people while performing at Rock in Rio.

After the event, he wrote about his health problems, saying, “After leaving the stage, the weariness overcame me and I knew that I needed to make my health a priority at this time.

So for the time being, I’m going to stop touring. I’ll be fine, but I need some downtime to recover. Introducing our show and our message of justice to the globe has made me incredibly proud. I’m grateful for your prayers and support during this entire ordeal, and I sincerely adore you all.

The Justice World Tour was announced in March of this year, however due to sickness, he had to cancel his North American tour. Up until March 2023, he had 70 gigs scheduled for South America, Asia, Australia, New Zealand, and Europe.

Ellie Goulding bemoans the gender pay gap in the music industry, saying, “We still have to sexualize ourselves”

At the airport, AR Rahman runs into Ilaiyaraaja and declares, “TN is always the destination”