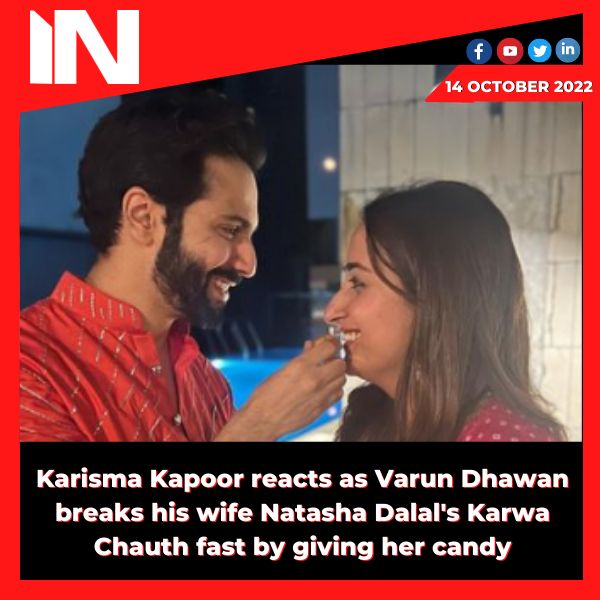 On Karwa Chauth, actor Varun Dhawan broke his wife Natasha Dalal’s fast by giving her candy. Varun posted images from the festivities on Instagram on Thursday. Varun dressed in an orange suit while Natasha Dalal chose a pink ethnic attire for the event.

Varun and Natasha posed next to one another and grinned for the camera in the first image. In the following image, Natasha grinned as Varun gave her a candy as they were holding hands. Happy #karvachauth (infinity and red heart emojis), the actor wrote as the post’s caption. Karisma Kapoor and Zaheer Iqbal responded to the post by using the emojis for a red heart, an embrace, and sparkles.

Natasha and Varun joined Anil Kappor for celebrating the event at Anil Kapoor’s home in Mumbai. Sunita posted a message along with images of Natasha on Instagram. “Festivals, in my opinion, are about tradition, faith, and belief. Karwa Chauth is a day for ladies to get together and celebrate with one another in addition to being a day to fast for your husband’s long life. I therefore wish you a day full of love, warmth, and celebrations wherever you may be and whatever your believe and creed may be!”

On January 24, 2021, Varun and Natasha, his longtime girlfriend, got married. The coronavirus outbreak made the wedding a small, intimate gathering with few guests.

Fans can watch Varun and Kriti Sanon in the Amar Kaushik-directed horror comedy Bhediya. The movie, which will be released in theatres on November 25, also stars Abhishek Banerjee. The majority of the film was shot in Arunachal Pradesh.

On October 19, the official trailer is expected to debut. The newly released teaser featured the mystical Arunachal Pradesh highlands but did not reveal any of the main protagonists’ looks or faces. As the wolf pursues a man through the woodland, the brief video also depicts a hunt in progress.

In addition to Bhediya, Varun will co-star with Janhvi Kapoor in the upcoming social drama Bawaal. Varun last appeared in the movie office success JugJugg Jeeyo. The movie, which stars Kiara Advani, Neetu Kapoor, and Anil in key roles, was released in June of this year.

In a new video, people react after seeing Sara Ali Khan and Shubman Gill leaving a hotel together amid relationship rumours.