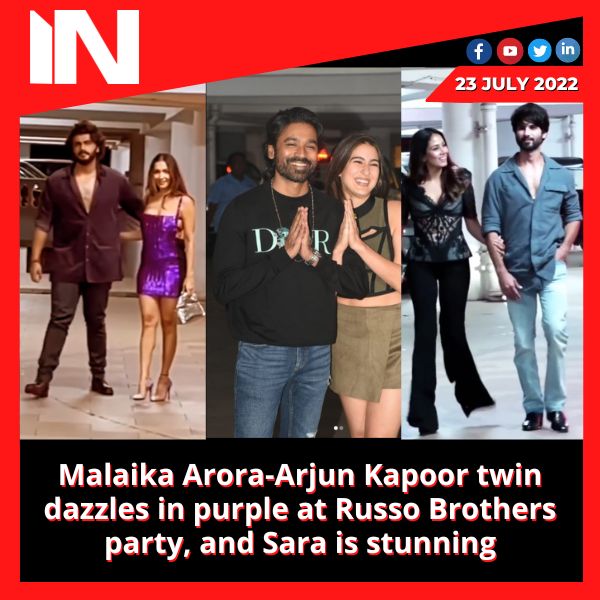 Arjun and Malaika arrived together, both dressed in purple. Arjun sported a purple shirt and a pair of black jeans, while Malika wore a minidress. Sara Ali Khan and actor Dhanush came. With his wife Bhavana Pandey and fashion designer Nandita Mahtani, actor Chunky Panday was spotted. The event was also attended by interior designer Gauri Khan and actor Shah Rukh Khan’s son Aryan Khan. Shahid Kapoor, an actor, was there with his wife Mira Raput.

The Russo Brothers’ party was also attended by other famous people, like Ananya Panday, Kiran Rao, Raveena Tandon, Sanjay Kapoor, and Maheep Kapoor, who are currently in India for The Gray Man’s Netflix promotion. The movie had its online debut on July 22 and stars Ryan Gosling, Dhanush, and Chris Evans. The movie’s showing took place in Mumbai on Wednesday night.

The Gray Man is an adaptation of the 2009 book of the same name by Mark Greaney. In the movie, Ryan Gosling plays CIA agent Court Gentry, also known as Sierra Six, who is being sought after by international killers like Lloyd Hansen (Chris Evans). Dhanush plays the part of Avik San, the “lethal force” who can prevent him from disclosing a secret of a shadowy agency.

In a recent interview with PTI, Anthony Russo discussed Dhanush and said, “People I know are texting me and saying they want more Dhanush… We would like to keep our options open and hope to use this character in additional projects.”

Advertisement
Related Topics:arjunkapoorFeaturedmalaikaarorapartypurplerussoSARAsazzlesstunningtwin
Up Next

When Natalie Portman was asked for a picture by Ranbir Kapoor, she said, “Get lost.”