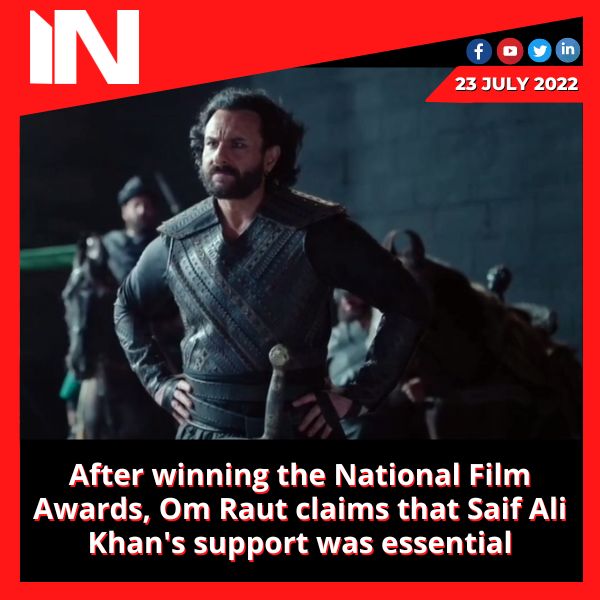 According to director Om Raut, Tanhaji: The Unsung Warrior would not have been feasible without the help of Ajay Devgn and Saif Ali Khan, who played the key roles. The 68th National Film Awards were announced on Friday, and the movie took home three of them. Ajay Devgn won the best actor prize, which he split with Suriya, and the movie also took home the prizes for best popular movie offering family-friendly entertainment and best costume.

In a recent interview, Om said to News18 that “Tanhaji: The Unsung Warrior is my labour of passion. Ajay Devgn sir, who not only accepted to play the major role but also put up the effort to produce the movie, gave it his full support. I’m pleased that the movie took home the 68th National Awards’ Best Film Award for Wholesome Entertainment. I also congratulate Ajay Sir on his achievement as the movie’s Best Actor. He was the purest expression of Tanhaji. Without giving Saif (Ali Khan) sir a special mention, whose assistance was essential to the success of this movie, this would fall short. He continued by saying that the film’s entire cast and crew are its cornerstones and that the award is for each one of them.

Saif had said in an interview shortly after the movie’s debut in 2020 that his role was “wonderful,” but added that there was no notion of India prior to the arrival of the British and that period dramas could not be considered to be historical accounts. The actor received harsh criticism for the remark.

“Somehow I refrained from taking a position… Saif stated, “I was quite excited to do the character because it’s a delicious role. Maybe next time I would. However, I disagree when individuals claim that this is history. I am very familiar with the past.

In a statement, Ajay Devgn expressed his thanks for winning his third National Film Award, saying, “I’m happy to receive the Best Actor Award at the 68th National Awards alongside Suriya, who won for Soorarai Pottru. I extend my gratitude to everyone, but especially to my creative team, the audience, and my followers. I thank the Almighty and my parents for their blessings as well. I wish to congratulate each of the other winners.

Advertisement
Related Topics:Essentialnationalfilmawardsaifalikhansupportwinning
Up Next