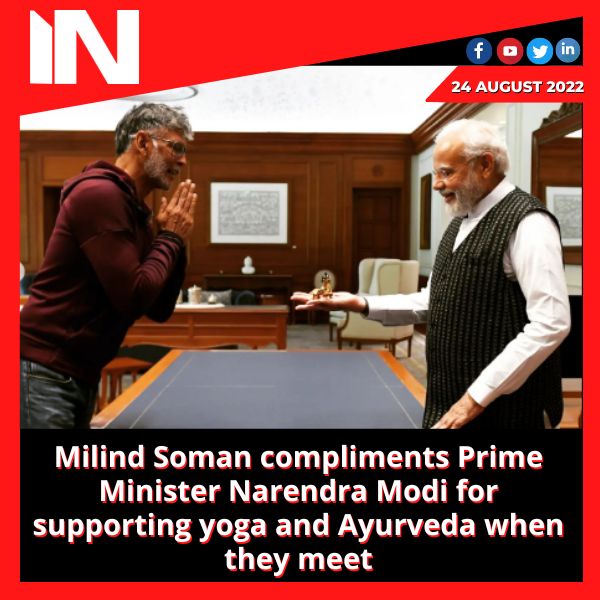 Milind Soman, a former actor and current fitness enthusiast, recently met Prime Minister Narendra Modi. From the Prime Minister’s Office in Delhi, Milind tweeted a photo of himself with the PM on Wednesday. The actor claimed that following his most recent “unity run,” he visited PM Modi, with whom he discussed their “common interest in ancient Indian traditions of sport, health, and fitness.”

“Was very thrilled to meet Hon PM @narendramodi at @PMOIndia after the #UnityRun and discover a mutual passion in ancient Indian traditions of sport, health, and fitness,” Milind tweeted beside a photo of the two on Twitter. I congratulated him for all that he is doing to spread awareness of yoga and Ayurveda throughout the nation. Milind appeared in the photo sporting blue jeans, a maroon blazer, and his trademark slippers, while PM Narendra Modi wore a kurta-pyjama with a jacket.

Additionally, the actor gave the PM a Krishna idol that his wife, Ankita Konwar, had acquired in Vrindavan. During Janmashtami, @ankita earthy brought him a Balakrishna from Vrindavan, which Milind gave to him.

Milind was referring to his 450-kilometer, barefoot trek from Jhansi to Delhi, which he called the “unity run.” In order to “celebrate 75 years of India’s Independence,” Milind undertook the run. On Independence Day, he began at Jhansi Fort and finished close to Red Fort in Delhi a week later. The annual run’s second iteration was this one.

What better way to celebrate Azadi Ka Amrit Mahotsav than the Togetherness Run conveying the message of unity, peace, and harmony?, Milind had earlier stated in a statement. The Unity Run 2022 pays homage to India’s 75 years of progress, as well as to its great past in terms of its people, culture, and accomplishments.

Early in the 1990s, Milind began his modelling career. He also made appearances in music videos, most notably Alisha Chinai’s Made in India. Additionally, he has appeared in a number of movies, such as 16 December, Rules, Bheja Fry, and Bajirao Mastani. His most recent appearance was as a cameo in Masaba Masaba 2.

Enter Aparshakti Khurana’s luxurious Mumbai home, which was built in honor of his daughter