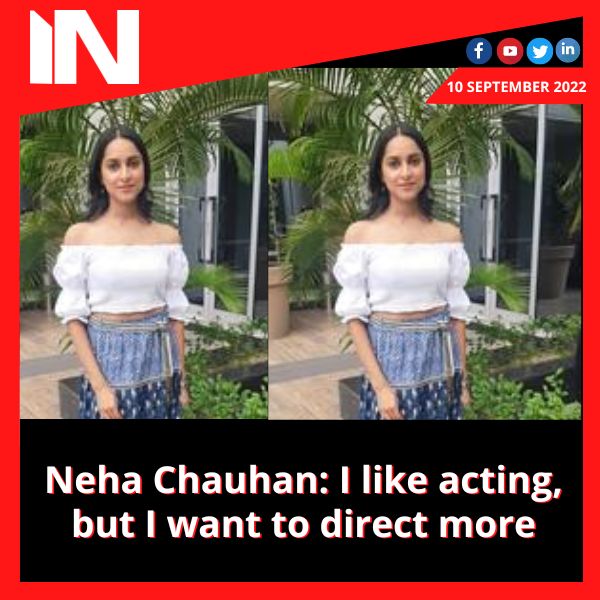 Actress Neha Chauhan, who made her acting debut in LSD: Love Sex and Dhokha (2010), claims that she never considered becoming a front-of-the-camera star and that she originally moved to Mumbai to pursue a career in directing. The actor, who was last seen as a political strategist in Maharani-2, said, “I have heard about destiny, but I have seen it play out in my life.

“When I moved from Indore, I did not have any acting dreams,” the young person recalls. In actuality, I had never considered being an actress! I completed a direction course before coming here to direct. I was asked to act by Dibakar (Banerjee, the director) in a matter of months, but I declined! Then I became involved with the casting of the same movie and production process. Finally, I agreed to act and it turned out to be a cult film.”


She switched between directions. Letters to Dharavi (2011), which is based on a unique method used by postmen to distribute mail, was written and directed by myself.

Chauhan was involved in numerous initiatives. “For me, there was never a break. I performed as the lead in two Tamil and one Haryanvi movies, worked on a Telugu film with an ensemble cast, performed in theatre with Pramod Pathak, appeared in commercials, and was involved in numerous web projects, such as Humorously Yours, It’s Not That Simple, Shaitani Haveli, and Inside Edge. I therefore never went unemployed, but now that OTT has taken off, it’s much more common. I simply want to keep up the enthusiasm.

She hasn’t been interested in TV though. “Scripts without a beginning and an end don’t interest me, and I know I won’t be able to give them right, so why get involved prematurely and regret it later? I agree that working in television pays well, but money can’t be the primary driving force.

Her desire to direct has finally begun to materialise. “At the moment, my mind, body, and soul are wholly devoted to performing, but I have a gnawing need to start directing once more. I’ll start with the short films I’ve written and use my acting talents and background working with renowned directors like Satish Kaushik, Dibakar, and Shubhash Kapoor. Most likely, something will occur in a year.

She has a good connection to UP. “My mother is from Moradabad, and my father is from Bijnor. I was born in Nigeria, yet I later lived in Faridabad and Indore for the majority of my life. I shot the movie Kaagaz in Lucknow’s surroundings in 2019 and am currently filming another series (Moonlight) in the state capital.

Additionally, she will return to Rocket Boys in the upcoming season.

“I am pleased to say that I enjoy working with the folks I do. I don’t have high expectations, and I just strive to set a little bit higher standards with each assignment. She claims that it’s a wonderful experience to embody and maintain the persona throughout the days of filming.

House of the Dragon: Mily Alcock on Rhaenyra’s infatuation with her uncle Daemon