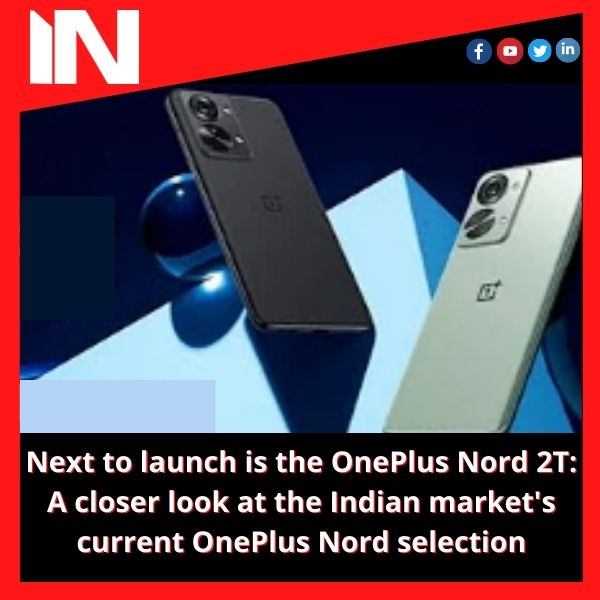 Prior to 2019, OnePlus was largely a premium flagship brand with an annual release cycle of 2-3 devices that was more or less fixed. The early half of the year saw the introduction of the OnePlus number series phone, while the second half saw the introduction of the T variant. The business debuted a Pro option with the OnePlus 7 series. However, OnePlus started adding a new low-cost “Nord” series to its smartphone portfolio in July 2020. By dropping the premium price tag for volume, Nord also symbolises a substantial change in OnePlus’ target market and aiming for a larger slice of the smartphone pie.

The OnePlus Nord 2T, the most recent OnePlus phone, will go on sale in India next month and feature a MediaTek Dimensity 1300 CPU, 50MP camera, and 80W fast charging. Given that the Nord 2’s starting price was Rs 27,999, we may anticipate that the Nord 2T will be priced in the same or a somewhat higher range.

Additionally, it is obvious how significant the Nord market has become for OnePlus. A OnePlus Nord Watch may also be in the works, adding another component to the whole brand ecosystem, according to certain reports. Right now, OnePlus is selling earbuds with the Nord brand for Rs 2,799.

Here is a look at the development of the Nord series and every phone that is offered to Indian customers under it. Due to the lack of availability of options like the Nord N10, N100, and N200 here, we are just concentrating on devices offered in India.

The OnePlus Nord was first introduced in 2020 and went on sale in August in India. The Nord’s lowest 12GB+256GB variant costs Rs 24,999, while its maximum option costs Rs 29,999. In a sense, the initial price of the Nord was comparable to that of the OnePlus One from a few years ago.

The Nord was unmistakably a mid-range alternative, targeted at customers prepared to spend between Rs 25,000 and Rs 30,000 for a smartphone. The OnePlus 8 started at Rs 41,999 at the time, making OnePlus’ own premium series much more expensive.

The Nord had a 6.44-inch AMOLED display, a Qualcomm Snapdragon 765G processor, 48MP quad-cameras on the back, and 32MP+8MP front-facing cameras. For individuals who desired a more “luxury” brand without spending a lot of money, The Nord was a choice. The Nord was OnePlus’ first step in its development plans, and the company has already established itself as a trustworthy premium brand in India.

But it became evident throughout 2020 that OnePlus had no intention of letting “Nord” be just another clumsily made mid-range series. Rapidly following were the Nord 105G and Nord 100 5G. Both begin at less than $200, with the Nord 100 being the most cost-effective choice on the list. However, the US and European markets were the only ones to receive these phones; India did not receive them.

OnePlus added more models to the Nord portfolio in 2021. This time, there was the Core Edition (CE) Nord CE 5G. The device sported a 64MP triple camera, a Snapdragon 750G processor, a 6.43-inch AMOLED screen with a 90 Hz refresh rate, and a 45000 mAh battery with Warp charge.

More significantly, the Nord CE was even more affordable than the original Nord, with a starting price of Rs 22,999. This also made OnePlus more competitive against Xiaomi, Samsung, Vivo, and Oppo, which frequently offer a variety of smartphones in the same price range.

The company also unveiled the OnePlus Nord N200 5G, which features a Snapdragon 480 CPU that is more modestly priced at at Rs 10,000 in India. However, India never saw the sale of that phone.

The Nord 2, the replacement for the original Nord phone, debuted shortly after the Nord CE. The starting price of this one was little greater than that of the original Nord at Rs 27,999. Furthermore, it was obvious that OnePlus had determined that there would be some distinction between the Nord’s numbered variants and the CE.

While the CE was more inexpensive, the Nord numbered series would be more in the mid-range, closer to the Rs 30,000 market. The MediaTek Dimensity 1200-AI processor that was used in the Nord 2 was another departure from the Qualcomm chipsets that the company had previously only used. The latest 50MP triple camera configuration, a 90 Hz display, and a 4500 mAh battery with 65W rapid charging are all included in the Nord 2.

The Nord CE 2 soon after. It went on sale in February 2022, with prices starting at Rs 23,999. The phone had a 64MP camera configuration, a 6.43-inch display, a Mediatek Dimensity 900 CPU, and a 4500 mAh battery with 65W rapid charging. Given the design characteristics, we remarked in our evaluation that the Nord CE 2 resembled Oppo more than OnePlus.

We received the OnePlus 10R and Nord CE 2 Lite for the Indian market in April 2022. This was what we may refer to as OnePlus’ first legitimate rival to Realme’s number series, which dominates the sub-Rs 20,000 market and belongs to the Redmi Note series. The Snapdragon 695 is included in the entry-level OnePlus CE 2 Lite, which costs Rs 19,999.

The goal of the Nord series, according to OnePlus India head Navnit Nakra, is to now reach as many customers as possible. This explains why OnePlus offers such a wide range of alternatives across price points where it hasn’t previously competed.