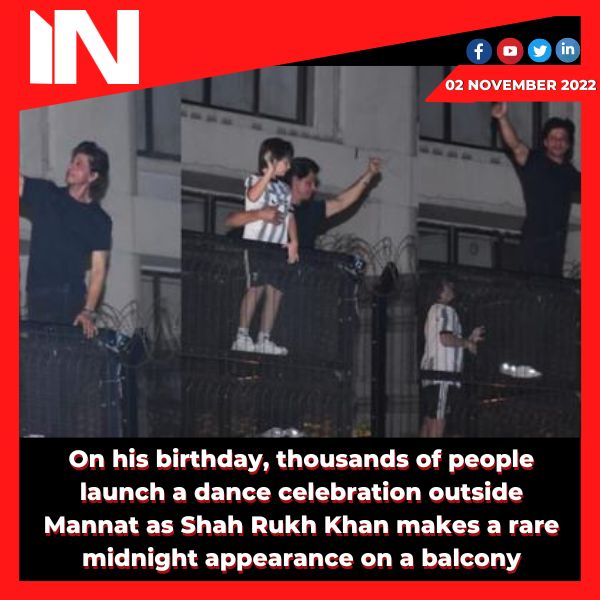 On his birthday, Shah Rukh Khan appeared at midnight on the balcony of his Mumbai residence to greet his supporters.

On his 57th birthday, actor Shah Rukh Khan made a rare midnight appearance in front of his Mumbai residence and gave his followers a glimpse of himself. Shah Rukh visited the Mannat balcony on Wednesday to greet his supporters. AbRam Khan, his youngest child, joined him.
Online users posted numerous images and videos of Shah Rukh on his balcony. Shah Rukh could be seen waving to the large crowd gathering in front of his house in a video posted by a fan account. He also gave his admirers the thumbs-up, saluted, clapped, blew kisses, and extended his hands in greeting.

The actor maintained his hand on his chest and bowed his head as well.

Shah Rukh also posed with his arms wide in his trademark manner. From the balcony, he took a selfie with his followers. Shah Rukh donned blue jeans and a black t-shirt. AbRam was dressed in shorts and a white t-shirt. The actor spent more than two minutes interacting with his admirers. Fans gathered outside Mannat to wish the star, many of them were carrying gifts including candies, t-shirts, and large Shah Rukh posters.

A unique birthday greeting for Shah Rukh was written by director Farah Khan. Farah posted a video of some memorable interactions with Shah Rukh on Instagram, including scenes from filming, dance practises, and award ceremonies. She penned, “My Shah, my friend, megastar, the one who helped me become a director, who is a King while being modest, who has the guts to laugh the loudest at himself, and who is bigger than the movie industry itself. bday greetings, @iamsrk Thank you for everything you are; I’m so happy to call you a friend.”

Shah Rukh will next be seen with Deepika Padukone, John Abraham, and director Siddharth Anand in the action-thriller movie Pathaan. The Hindi, Tamil, and Telugu versions of the movie are scheduled to open in theatres on January 25, 2023.

Aries may purchase a new vehicle today (November 2), and Cancerians should show respect to elders.

What to anticipate from Apple’s M2-based Macs, from the new Mac mini to the MacBook Pro