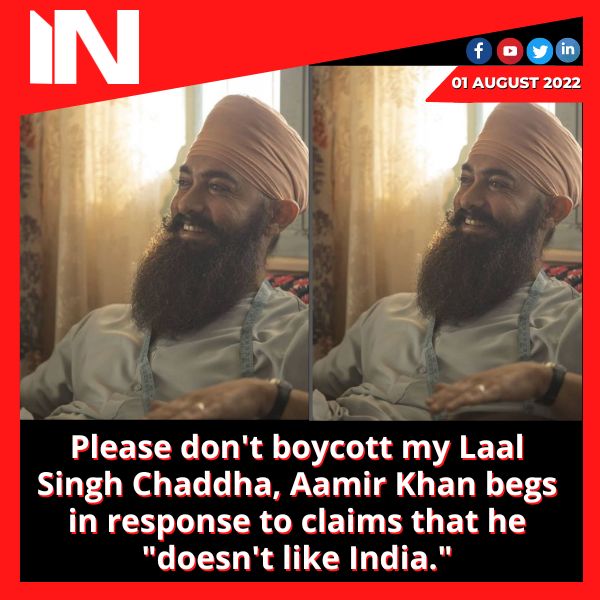 The Twitter trend to “boycott Laal Singh Chaddha” has been addressed by Aamir Khan. Due to comments Aamir made about India a few years ago, the upcoming Forrest Gump remake is receiving backlash on social media. Many people are urging a boycott of the movie.

According to a report in India Today, when asked if he gets upset when such campaigns are made against his movies, Aamir responded, “Yes, I feel sad. Additionally, I find it sad that some of the people who are saying this secretly think I am someone who dislikes India. They hold this belief in their hearts, but it is false. That some people feel that way is unfortunate. That is not true. Do not boycott my movie, please. Please view my movie.

It appears that some Twitter users searched through the archives and found Aamir’s contentious remark about “India’s growing intolerance” and shared it there. Online, some of Kareena’s contentious past remarks have also been making the rounds. Previously, when the film’s creators launched the trailer in May, the same hashtag was trending.

Aamir Khan made the contentious claim in an interview in 2015 that “Our country is very tolerant, but there are people who spread ill-will.” His wife Kiran Rao also garnered media attention when she revealed that she had considered leaving the nation for the sake of their children’s safety.

Advertisement
Related Topics:aamirkhanboycottFeaturedIndialaalsinghchaddhalikeresponse
Up Next

As Mumtaz celebrates her 75th birthday, her husband Mayur gives her jewellery, arranges lunch in Uganda, and gives her a Mercedes