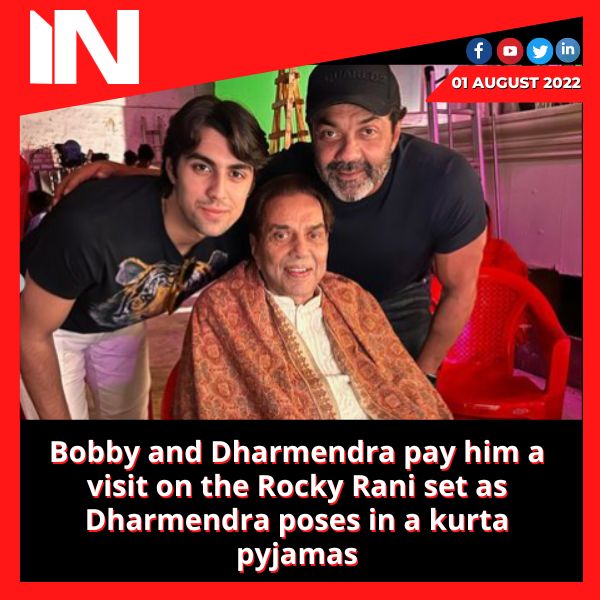 On the final day of filming for Rocky Aur Rani Ki Prem Kahani, actor Dharmendra posted a picture of himself from the set. Bobby Deol, the son of Dharmendra, also posted images from the sets. Bobby posted pictures of himself, Aryaman Deol, and Dharmendra.

Dharmendra wrote, “Friends with his blessings, your good wishes I am back to my job,” along with a photo of himself. I adore you all. The lead actor in the movie, Ranveer Singh, called him “the most lovable” in a comment on his photo. Love you, papa, Esha Deol said. “Love you, papa,” Bobby wrote. “Just can’t wait for the film, sir,” one fan exclaimed. Another person commented, “You look radiant in this photo.”

Bobby wrote, “Was great to visit papa on his last day shoot of #rockyaurranikipremkahani,” along with two images from the sets. The group smiles broadly in the pictures as they stand together in a group shot. Three generations in one image, wrote one fan. Amazing.” Bohot sundar (very pretty), said another.

A few months prior to the announcement of the release date, Karan posted a picture of himself and his leading man alongside a poem that read, “So much josh and jazbaati jawaani, Pritam ki dhamakedar dhun bhi hai sunani (So much energy and the emotions of the youth will be told to you through Pritam’s music).” He wrote, “Garam Dharam ka swag toh dekho (check out hottie Dharam’s swag)” when referring to Dharmendra. By saying, “We are coming soon to win your ishq wala pyaar!,” Karan concluded the post. on February 10th, 2023, #RockyAurRaniKiPremKahani.

The next time we’ll see Dharmendra is in Apne 2, which also stars his sons Sunny, Bobby, and Karan Deol, who is Sunny’s son. The movie was scheduled to be released in November 2020, but the Covid-19 pandemic caused a delay. The film will be directed by Anil Sharma.

Please don’t boycott my Laal Singh Chaddha, Aamir Khan begs in response to claims that he “doesn’t like India.”

When R Madhavan remarks, “Rang De Basanti was interesting for me for 9 minutes,” Tanmay Bhat and company laugh