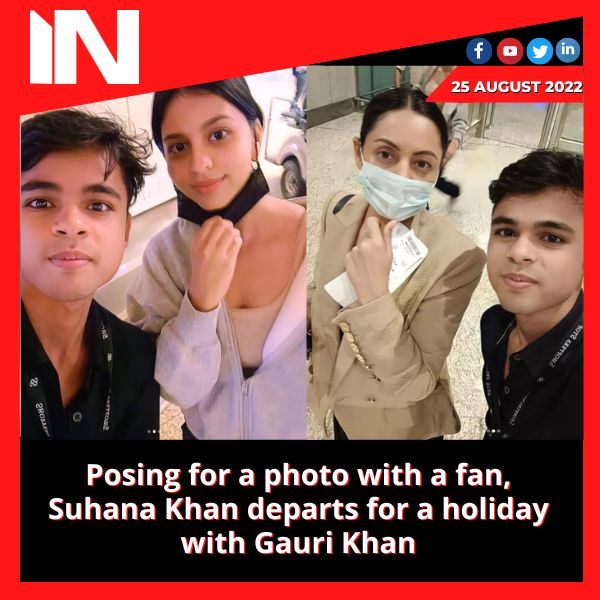 Gauri Khan, an interior designer and the wife of actor Shah Rukh Khan, and her daughter Suhana Khan boarded a flight for a holiday. A paparazzo account posted a video of Suhana and Gauri exiting their car at the Mumbai airport on Instagram.

They were asked to pose for photos by the paparazzi as they made their way to the door. Suhana appeared to be instructed by Gauri to enter the building while she posed for shots. Gauri chose a black dress, a beige blazer, and black shoes for the journey. She wore dark shades and had a purse with her. Suhana donned black jeans, white sneakers, and a grey jacket. She also had a pink bag with her.

A fan posted images of the mother-daughter team on Instagram. A person was spotted posing with Suhana in the first image, a selfie. As she lowered her face mask, she grinned. The following picture shows Gauri posing with the subject while wearing her mask.

Gauri and Suhana visited Serbia the previous year. Gauri posted pictures of them posing near the Church of Saint Sava on Instagram. “Creative benefits that a designer obtains is determined by the amount of travel they do; exploring different countries,” Gauri captioned the picture. Built in 1935, the Church of Saint Sava is a Serbian Orthodox church. Saint Sava, the patron saint of the Serbian Orthodox Church, is honoured by its dedication.

In 1991, Gauri and Shah Rukh got married. Suhana and their sons Aryan and AbRam Khan round out their family. Suhana had previously been enrolled in a cinema studies course at the Tisch School of the Arts at New York University.

Suhana will soon make her acting debut in The Archies, a movie directed by Zoya Akhtar that is based on the well-known Archie comics. Khushi Kapoor, daughter of Boney Kapoor, and Agastya Nanda, grandson of Amitabh and Jaya Bachchan, will also appear in the movie. Other newbies who play lead roles in the movie are Mihir Ahuja, Dot, Vedang Raina, and Yuvraj Menda.

It is a coming-of-age tale that will expose the teenagers of Riverdale to a new generation in India. It was produced by Tiger Baby and Graphic India. The movie is slated for a 2023 release.