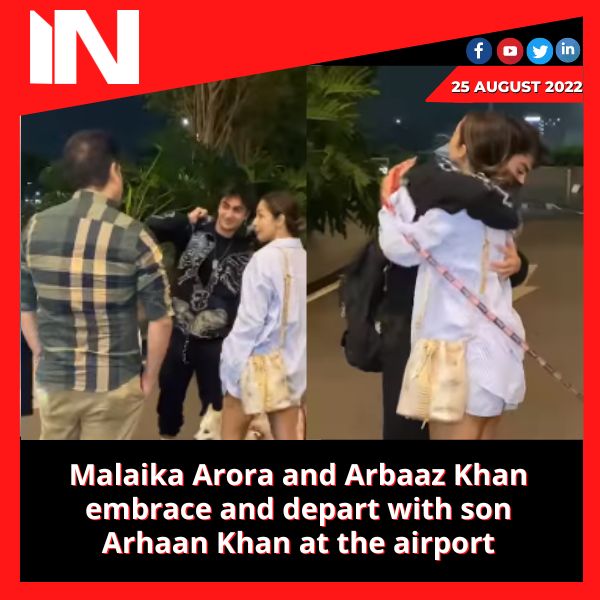 On Wednesday night, Arbaaz Khan and Malaika Arora were seen together at the Mumbai airport. To say goodbye to their son Arhaan Khan, the ex-couple was present. While some of their admirers applaud them for co-parenting their son, who attends a US institution, others were more amused by Malaika’s pet dog, who joined her in saying farewell to Arhaan.

Arbaaz Khan wore a shirt with beige jeans, and Malaika wore a casual top, a pair of shorts, and sneakers. Arhaan was dressed in a black jacket, T-shirt, and pants. Arhaan was given a hug by Malaika and Arbaaz while the group talked. In 1998, Malaika and Arbaaz got married. They announced their split in March 2016 after almost 18 years of marriage.

In 2017, they separated in writing. Their only kid is Arhaan. While Malaika is rumoured to be dating actor Arjun Kapoor, Arbaaz is allegedly dating model-actress Giorgia Andriani.

“Looks fine, even though they are divorced,” a fan said on a video of Malaika and Arbaaz interacting with Arhaan that was posted on Instagram by a paparazzo account. Like a gorgeous family, even though they are no longer together, according to another comment. Another commenter added, “Sensible parents, not egoistic ones.” Arbaaz and Malaika appeared to be satisfied, according to another person, who added, “Better happily divorced than miserably married.” Casper, Malaika’s pet dog, was mentioned in a comment along with the statement “He is the prettiest.”

Last year, Arhaan departed for the US. “As we both begin on a new and unexplored path, one filled with uncertainty, fear, excitement, distance, and new experiences… all I know is that I am super duper proud of you, my Arhaan,” Malaika Arora had said with a snapshot of the two of them on Instagram. It’s time for you to extend your wings, soar, and realise all of your ambitions. I already miss you.

Posing for a photo with a fan, Suhana Khan departs for a holiday with Gauri Khan