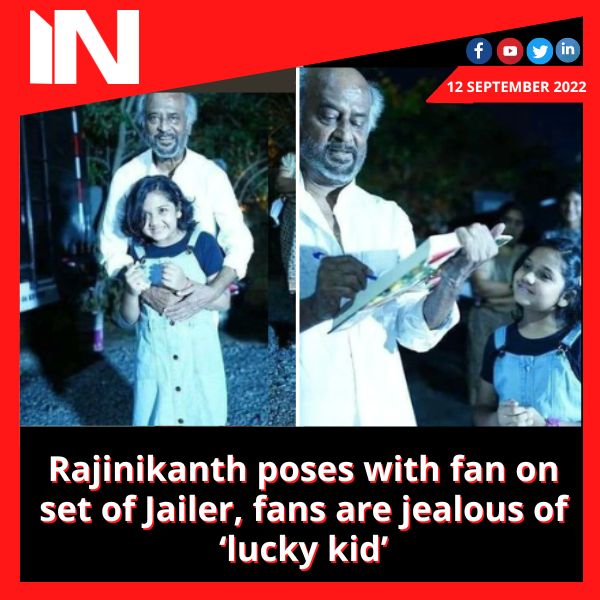 On the set of his next movie Jailer, actor Rajinikanth was photographed posing with a young female fan. He can be seen posing for the camera, holding the child from behind, and signing an autograph on a book. Fans responded to the photos by saying that the girl was lucky to have the opportunity to pose with the seasoned actor.

For Jailer, which also has Tamannaah Bhatia, Vinayakan, and Ramya Krishnan in significant parts, Rajinikanth collaborated with filmmaker Nelson. In the movie, which will be fully filmed inside a prison, Rajinikanth portrays a jailer. The star’s fan website used Twitter to share his most recent images. One admirer commented in the comments section: “Who  is the kid? Lucky”. Another comment read: “So blessed”. On person tweeted, “Lucky kid…”

Recently in Chennai, Rajinikanth was the focus of the song and trailer launch event for Mani Ratnam’s upcoming movie Ponniyin Selvan Part 1. He was the event’s primary guest, and Kamal Haasan and the whole cast of the movie, including Aishwarya Rai, were also there. Aishwarya stroked Rajinikanth’s feet during the event as she was overjoyed to finally reunite with her 2.0 co-star.

The last time we saw Rajinikanth was in the Tamil movie Annaatthe. In the Sun Pictures-produced film, Keerthy Suresh, Nayanthara, Khushbhu Sundar, Meena, and Jagapathi Babu also had roles. Rajinikanth revealed the tale of how Annaatthe was signed in a post on the voice-based social media site Hoote following the release of the movie.

Siva, who had worked with Rajinikanth for the first film, directed Annaatthe. Rajinikanth first expressed a desire to collaborate with Siva after witnessing his film Viswasam. “When Siva first met me, he told me that working with me would make a successful movie. I was shocked because I had never heard that before. He suggested that I play the lead in a movie with a plot and that it take place in a small-town setting.

Annaatthe ended up being a box office dud. To make up for the losses of Annaatthe, Sun Pictures reportedly hired Rajinikanth for Jailer and even cut his pay by 50%.