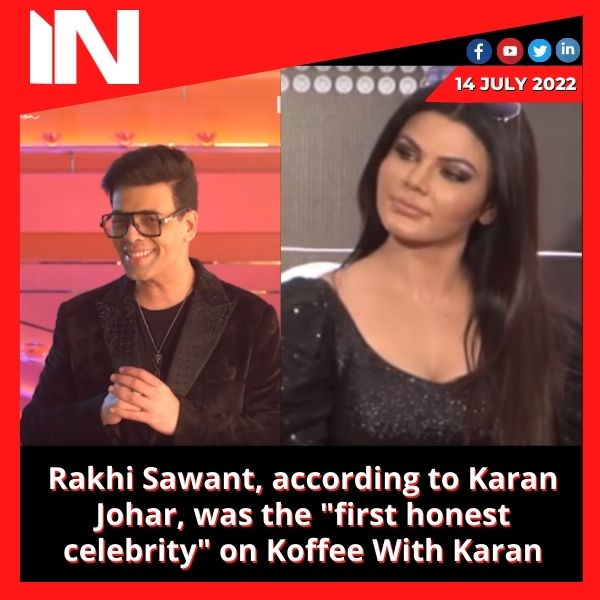 Rakhi Sawant, who was open and honest about herself on Koffee With Karan season 2 in 2007, has been referred to as the most honest celebrity by Aaran Johar.

Rakhi Sawant was the first openly honest star on Koffee With Karan, according to Karan Johar. Rakhi made an appearance on the talk show in season 2, where she delivered the well-known phrase, “jo bhagwan nahi deta, wo doctor deta hai.” According to Karan, it sparked a new trend among celebrities, who flocked to their surgeons for cosmetic procedures.

The seventh season of Koffee With Karan features Karan’s return. On Thursday, he will make a comeback with the second Koffee With Karan episode, which will star Janhvi Kapoor and Sara Ali Khan. The first episode aired last week and had Ranveer Singh and Alia Bhatt as guests.

Rakhi, who was last seen in Bigg Boss 15, now frequently attends movie events. In an interview with Peepingmoon.com, Karan Johar discussed interviewing Rakhi in 2007 and said, “At that point in time, she was a moment. Everyone was mentioning her. She was open and the first authentic celebrity to ever exist. I responded, “No, I’m very interested in her intellect,” when people asked if I was calling her to make fun of her. I’m still here. She is still holding back a lot, in my opinion, despite the fact that she is projecting a lot.

“Jo Bhagwan nahi deta, wo doctor deta hai” (A doctor gives what God does not bless with), was one of her most famous quotes that I still recall. After that, Rakhi was taken very seriously by everyone. Everyone has hurried to the doctor down the street, “Karan continued.

Rakhi had said, “Main mantralaya mein baith jaati, toh bhi mujhe itni khushi nahi milti jitna aaj is show pe aake mili hai!” while making an appearance on the programme. (As thrilled as I am after appearing on this show, I wouldn’t have been this happy if I was sitting in a ministry office.)

Advertisement
Related Topics:accordingcelebrityEntertainmenthonestIhtIndiaKaranjoharkoffewithkaranrakhisawant
Up Next

Tejaswi Prakash and Karan Kundrra, a couple in love, are photographed in the city and paint the town crimson; PICS