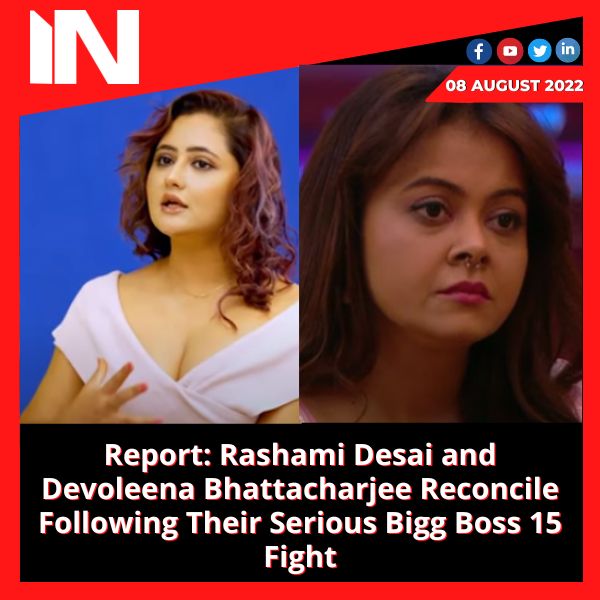 During their time on Bigg Boss 13, Rashami Desai and Devoleena Bhattacharjee were almost inseparable. However, when they reentered the contentious reality show during season 15 as wild card contestants, best friends turned into enemies. Even after the show ended, the two reportedly did not get along. Rashami Desai and Devoleena Bhattacharjee now seem to have rekindled their friendship, though.

According to a source close to the actresses, a reality show could not have permanently damaged their friendship, so they have moved on and are once again best friends. Rashami and Devoleena were too close; they genuinely cared for one another. Their Dosti (friendship) could not have been permanently harmed by a programme like “Bigg Boss.”

We anticipated that they would eventually reconcile and share a kiss “said the source.

According to rumours, Rashami Desai was the one to initiate efforts to mend their relationship. It appeared to have taken place during Devoleena’s illness. Desai made the decision to contact Bhattacharjee after learning of her illness. “Devoleena wasn’t feeling well a while back. When Rashami heard about it, she called her right away. She didn’t hesitate at all and made the first move without any ego, “added the insider.

Devoleena responded by talking to Rashami as if nothing from Bigg Boss 15 had happened, and ever since then, the two have maintained a cordial relationship. “Devoleena and Rashami conversed with one another as if “Bigg Boss 15” had never occurred between them. Following that, everything is fine between them, the source said.

For those who don’t know, Rashami was furious because Devoleena, the task’s supervisor during the Ticket to Finale task on Bigg Boss 15, failed to announce the winner. The latter charged Bhattacharjee with rendering an unjust judgement. Devoleena then accused Rashami of ruining the atmosphere in the home and using the victim card to incite conflict.

When Devoleena referred to Rashami as “selfish, fake, and a liar,” the argument only got worse. Devoleena claimed that the previous season’s inability to speak up due to her fear of Rashami cost her numerous friendships. Devoleena had remarked, “You need a new doll every season to play your games. Tujhe har season mein koi na koi tattu chahiye. Desai was not pleased with the accusations and yelled angrily at her.

Advertisement
Related Topics:BhattacharjeebiggbossDevoleenafightfollowingRashamireconcilereport
Up Next

Review of the film Haryana: It’s funny and has good acting, but it’s too long